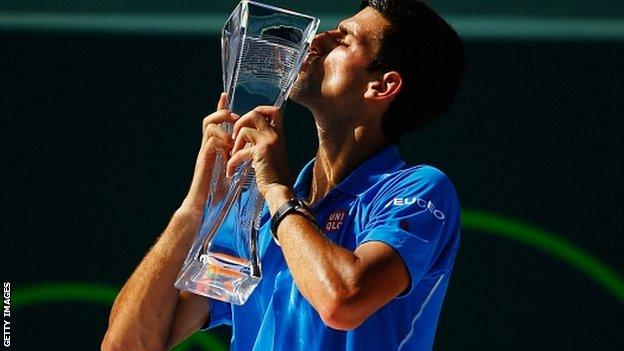 Djokovic, 27, takes his record against Murray to 18-8, and the Serb will tie Rafael Nadal's total of 141 weeks at the top of the rankings on Monday.

Murray, who gets married next Saturday, will move up from fourth to third.

The Scot, 27, twice led by a break in the first set and looked to have the momentum heading into the decider, but ultimately came up short once again.

"It has been a good start to the year for me so far," he told the crowd. "I'm not quite there where Novak is at, but I feel I am getting there. I just need to keep working hard."

Djokovic beat Murray in Indian Wells only two weeks ago, while the Briton's last victory over the Serb came in the 2013 Wimbledon final.

Murray clearly decided it was time to try a different approach and attacked relentlessly from the outset, especially on the return of serve.

It brought rewards, but both men were struggling with the bright Florida sunshine and the first 10 games were won from the same end of the court.

Murray had seen two leads disappear in that time and did well to hang on after Djokovic finally held from the tricky end, the Scot recovering from 0-30 to force a tie-break.

Some loose play led to Murray falling 4-0 behind, still facing the sun, and two poor forehands let Djokovic off the hook after he twice got back to within two points.

Djokovic duly closed out the set after 67 minutes and, with the temperature nudging 30C and a humidity level of 65%, both men headed to the locker room at the break.

There were fleeting signs of Djokovic hobbling and both men showed flashes of irritation as the encounter became increasingly punishing in the second set.

Overheads were missed by both and after Murray saved four break points in game three, he was furious to miss a chance of his own with a backhand in game four.

It was the Scot who found the inspiration when it mattered, however, playing a terrific return game at 5-4 and crunching away a backhand winner on set point.

Djokovic erupted furiously in the direction of his player box, and then the umpire after receiving a code violation, but once play resumed he quickly regained control of the contest.

Murray failed to put away three smashes in a row and then netted a volley as he dropped serve at the start of the third and Djokovic all but sealed it with a second break for 3-0.

The Serb had finished off Murray with a love set in February's Australian Open final and he did so once again to become the first man to win the Indian Wells-Miami double three times.