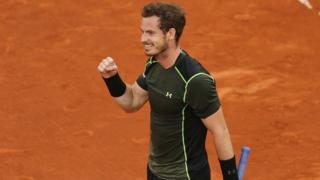 Britain's Andy Murray says he is "proud" of his 6-3 6-2 victory over Rafael Nadal to win the Madrid Masters, his first on clay against the Spaniard.

The world number three, who admitted he "wasn't expecting" such success a couple of weeks ago, collected his maiden Masters title on clay with a dominant performance.

Murray describes the win as a "step in the right direction" as he looks to win his first French Open, which begins on 24 May at Roland Garros.