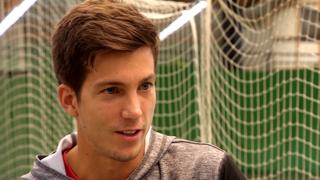 The former Slovenian player discusses his goals and his ultimate dream of playing for Great Britain in the Davis Cup.

His ranking means it will be the first time in eight years that Great Britain will have two direct entrants into the men's draw for the upcoming French Open.

Click here for more information about how to get into tennis.