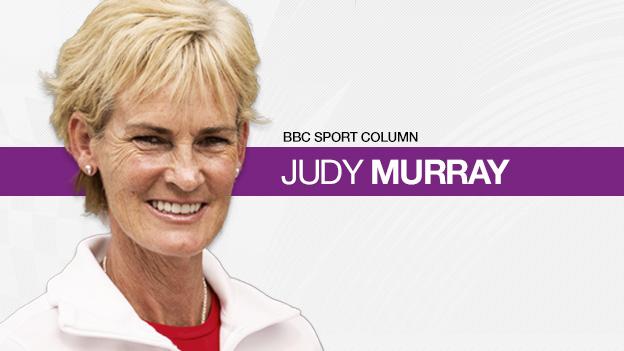 Judy Murray is a tennis coach and captain of the Great Britain Fed Cup team. For Women's Sport Week she talks about her coaching career and what needs to change to enable more women to have careers in sport.

There were three significant moments in my coaching career where I was given opportunities which probably set me on the road to where I am now, and all of those opportunities were created by women.

The first was when I applied for a place on the Lawn Tennis Association's brand new performance coach award in 1994.

There were 20 places available - 18 went to men and just two to women. I was lucky enough to be one of those two, despite having little performance coach experience, and I'm sure I was given the chance because the head of the coach education department was a woman.

It was a year-long course with all workshops based in England and, at the time, I had two young children aged seven and eight.

It was pretty tough going with a lot of travelling but I somehow managed to pass and was subsequently given the chance to captain some of the under-12s and under-14s British girls team trips. Who appointed me for that? A woman.

The role involved travelling overseas and looking after the children on and off court at week-long events and that's where the maternal side comes in - very useful!

That period opened my eyes to international junior standards and allowed me to learn from foreign coaches.

The last opportunity was when I applied to be Scottish national coach.

The role had been vacant for 18 months and I was encouraged to apply for it by the chief executive of Tennis Scotland - who was a woman.

Although I'd just passed the PCA course, I still lacked experience at national or international level so I didn't think I had a chance of getting a job like that.‎ But the interview panel seemed to like my passion and ambition for Scotland and they gave me a go.

There's no doubt tennis coaching is a male-dominated profession, especially at the very top of the game, and it's a situation which has to be addressed.

It's been a great move for Andy but it's also been great for women's coaching - it shows there are no limits.

Last month he said he was amazed by the level of criticism his appointment of Amelie has attracted and I know he's been surprised by the media attention it received.

But it is a partnership which has proven women can operate at elite level whatever the sport because it's about skills and personality fit, not gender.

What is quite staggering is that there are no women on the 14-strong board of the International Tennis Federation.

Most people will think of tennis as being one of those sports which is equal, certainly in terms of prize money and media exposure, yet those who govern the sport are all male.

I'd like to see the introduction of quotas. If we're really serious about trying to create more opportunities for women, not just to participate in sport but to deliver sport at all levels and all areas, we have to have a much bigger female representation.

There has to be a willingness among those in positions of power to ensure there is a pathway for women to progress, to make sure women don't get stuck halfway up the ladder simply because no-one is willing to give them the chance to reach the very top.

But we want women who have got a voice, who are strong enough to make their presence felt, not somebody who's just going to be taking a token seat and be overwhelmed by a male-dominated environment.

Why do governing bodies need more women making decisions? I really believe women would look out for the needs of women much better than guys simply because they're more passionate about it and understand women better. And we do represent 51% of the population...