Simona Halep, runner-up in 2014, is out after defeat by Mirjana Lucic-Baroni.

Sharapova on the mend

"I'm getting better," was two-time champion Sharapova's update on her health after her win over compatriot Diatchenko on Court Philippe Chatrier.

The second seed came into the tournament with a heavy cold and she skipped the usual post-match interview in the first round, prompting a chorus of boos.

"I've got to do what I have to do," was Sharapova's explanation, and she was again spared the microphone on Tuesday.

"For me right now it's really about recovery and just being healthy for the next round," she added.

Twenty-eighth seed Fabio Fognini antagonised the crowd even before he appeared for his meeting with Frenchman Benoit Paire, turning up 10 minutes late and then cheerily waving in response to jeers.

A boisterous atmosphere boiled over into a scuffle in the stands at one point with two spectators having to be physically separated.

The incident only temporarily distracted world number 71 Paire who prevailed 6-1 6-3 7-5 with Fognini telling him afterwards that he was suffering with food poisoning.

"I almost stepped in," Paire joked,

"I knew exactly what I had to do. If there is a problem in the crowd, if there is a donkey walking across the court, I don't care. I want to play my match."

Practice makes for a busy court 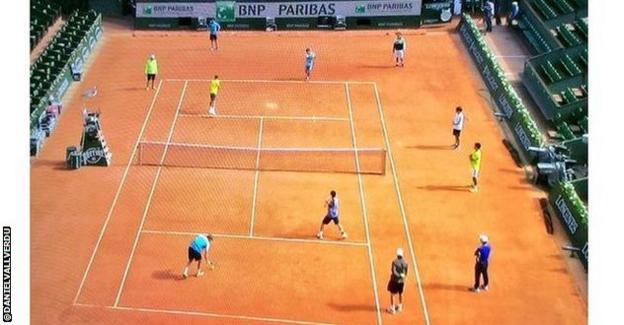 You have to get your towel down early to claim a practice spot at Roland Garros.

Dani Vallverdu, who left Andy Murray's team in November and is now Tomas Berdych's coach, tweeted a picture of 11 players, coaches and entourage members packing out one of the show courts to get a feel for the Parisian clay.

"Who said tennis was an individual sport..." Vallverdu said.

Highway to the presidential box

Angus Young, guitarist with veteran rock group AC/DC, was in attendance to see Federer's win over Granollers, rising from his seat at one point to acknowledge the crowd.

Federer has twice seen Young and his band-mates in concert.

"I even met him once," Federer said.

"I guess he still remembers. I had long hair. It was 15 years ago."

Kyle Edmund's withdrawal from Thursday's meeting with Nick Krygios because of a stomach injury reduced the number of Britons left in the singles draw to two.

Murray's brother, Jamie, gave the family a morale-boosting win over Sousa on Wednesday as he and Australia's John Peers beat the Portuguese and Thomaz Bellucci 6-7 (6-8) 6-4 6-2.

"I've never issued a complaint. I have been fairly good with the umpires that I have had in my career. I haven't had any problems with anyone. So, sorry. I know it's not the answer maybe you wanted to hear." Sharapova is asked whether she has requested an umpire be moved from her matches.

"I think everybody is a little bit more alert. That was the only wish I had. It's just that the security is more alert. They don't need to change anything that we need to have fences and all that stuff, not at all." Federer enjoyed the beefed-up protection after a fan ran onto court following his opening match.

"I think he had this image because he actually was the boss." Gilles Simon concedes that Jo-Wilfried Tsonga has always been top dog among his compatriots.

"Being able to do my laundry. That's a big one. You can have breakfast in your pyjamas if you want." Sam Stosur on the joys of staying in an apartment rather than a hotel.

"My husband is Italian. My sister also married an Italian, so we have two in the house and my mum said, 'Please,' to our third sister, 'Just don't bring another Italian in the house.' Too much. Three Italians would be too much." Lucic-Baroni explains the quota system in force in her family home.

French number 13 Alize Lim succeeds where a court invader failed, bagging herself a selfie with Federer. 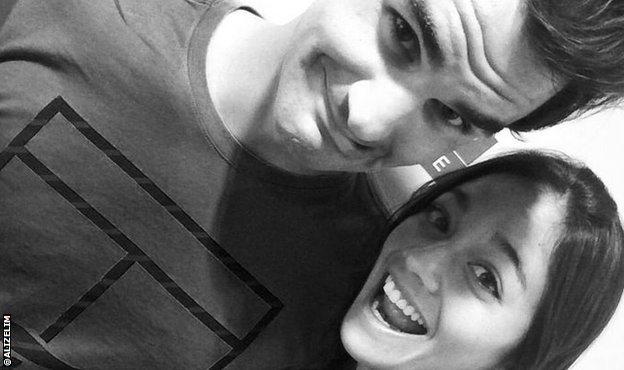