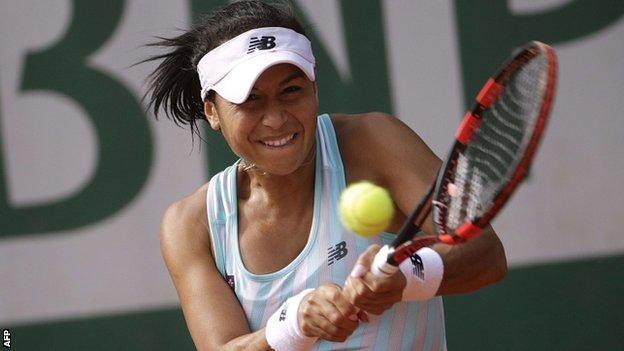 Britain's Heather Watson went out in round two of the French Open for the fourth time in five years with defeat by Sloane Stephens.

Watson, 23, dropped serve five times as she was convincingly beaten in one hour and 10 minutes.

It was Stephens' first victory over Watson in five meetings and takes her through to meet Bulgaria's Tsvetana Pironkova.

Watson played with her right arm heavily taped, but insisted it was not the cause of her slow start to the match.

"I've had this with my arm for a week and a bit now, but it wasn't the reason I lost," she said.

"I felt fine. I had it taped up and took some painkillers before the match, but it was just me really. I was just pretty sluggish and slow out there.

"After a set and a bit I finally got into it, but at that point it was a little bit too late. It would've been a tough battle to get all the way back."

Stephens, 22, came into the match off the back of a first-round win over Venus Williams and dominated Watson from the outset.

She broke serve twice to lead 3-0 within just eight minutes and clinched the set with a rasping forehand down the line that Carlos Bernardes confirmed was good, much to Watson's annoyance.

The Briton fought back from a break down to level at 4-4 in the second but was then broken to love, and a wayward forehand on match point gave Stephens victory.

"I was giving away a lot of free points," added Watson. "I made a lot of unforced errors.

"Obviously she played well and did what she needed to do. She had some really heavy balls which pushed me back in the beginning and made me think.

"But I think I was just very inconsistent."