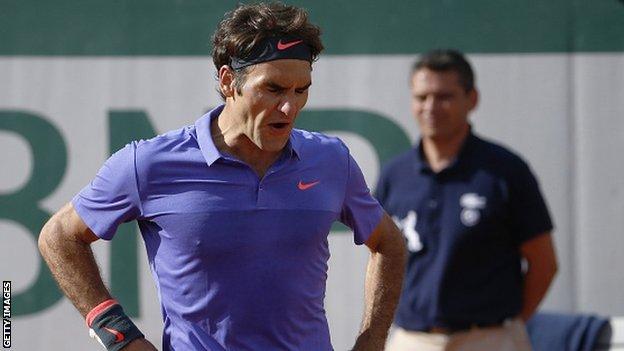 Wawrinka, 30, had lost all four of their previous matches at Grand Slam tournaments.

But the number eight seed overcame his 33-year-old Davis Cup team-mate to cause an upset at Roland Garros.

Wawrinka will meet home favourite Jo-Wilfried Tsonga in the semi-finals following his win over Kei Nishikori.

World number two Federer was second best throughout against an inspired Wawrinka and failed to break serve in a Grand Slam match for the first time since the 2002 US Open.

Federer was broken in the third game of the first set and in the seventh game of the second set.

When a couple of close calls went against him in the third set tie-break, Federer's hopes of adding to his haul of 17 Grand Slam trophies were over.

A forehand volley on his second match point propelled Wawrinka, the 2014 Australian Open champion, to his first French Open semi-final.

"Today was my best match on clay and it's an incredible moment for me," said Wawrinka.

"I'm playing good tennis and I'm really pleased to be in the Paris semi-finals for the first time.

"I'm a little bit surprised to win that match in three sets and the way I did, but it's a great feeling."

No sooner had Federer left Court Suzanne Lenglen than he was talking up his chances on grass at Wimbledon, which gets under way on 29 June.

"I'm already thinking what I'm going to do over the next few days, because Wimbledon is going to be a big goal for the season," said the seven-time Wimbledon champion.

"That's where I want to play my best. It's a big goal for me. I want to win it, and I feel like my game is good.

"It's been solid, it's been positive, and I have just got to keep it up now."

It is 32 years since France had a home winner at Roland Garros but Tsonga's marathon victory over Nishikori kept hopes alive that could be about to change.

The number 14 seed breezed through the first set and was leading 5-2 in the second when the match was interrupted for more than half an hour after a metal sheet from a giant video screen was blown off, crashing into spectators and leaving three with minor injuries.

Although Tsonga, 30, went on to claim the second set 6-4, 25-year-old Nishikori, the number five seed, took the game to a fifth set before Tsonga secured victory.

No Frenchman has won the title at Roland Garros since Yannick Noah in 1983.

"I am super happy. It was tough because he came back strong but I kept my head high," said Tsonga.