However, just before 17-year-old Ana Konjuh lifted her maiden WTA title last week, there was an awkward moment of realisation during the trophy presentation that the bubbly would have to remain on ice.

A former junior world number one with two junior Grand Slam singles titles to her name, the Croatian's rise to being the only under-18 in the top 100 of women's tennis today has been remarkable.

And now a Wimbledon run is in her sights.

"When I was seven or eight, I was watching Grand Slams on TV and I said to myself, 'One day I'm going to be there'. Now I'm the one playing in them," she told BBC Sport.

As many young tennis stars are forced to do, Konjuh moved almost 400 miles away from home at the age of 10 to pursue her dream.

But, speaking with her at the Nottingham Tennis Centre, where she won the WTA's inaugural Aegon Open last week, it became clear she attributes that early success to the encouragement her dad Mario gave from the age of five.

"I grew up on the tennis court with my older sister, collecting balls and interrupting her practices - my father would say 'Come on Ana, move!' - and now look who's here," she said.

"If they let me go when I was 10 to live alone, they are okay with it. But I do miss them.

"They come to a lot of tournaments when they have the chance, because they normally take care of my three sisters. But that's fine. They're coming to Wimbledon, so that will be great."

About halfway through our conversation, a delicate wisp of body art became visible on Konjuh's wrist.

She had just finished her warm-down after winning two matches in one day at the Aegon Open, as both her quarter-final and semi-final were postponed because of rain in Nottingham,

The teen rolled up her sleeve to show the tattooed inscription and explain how it came about before she won her first junior Grand Slam in 2013.

"It says 'Faith' with a cross on the side. I have a lot of faith in my life - in God, in my family, in myself. It really means a lot. It gets me through," she began.

"The tattoo was actually a bet with my father. He didn't let me have one until I was 18, so I said 'If I win the Australian Open, I can get a tattoo'. He didn't expect it at all, so he said 'Okay', and we shook hands."

Konjuh then secured both the girls' doubles and singles finals in two days - and was quick to ensure her bet would be honoured.

No longer a junior 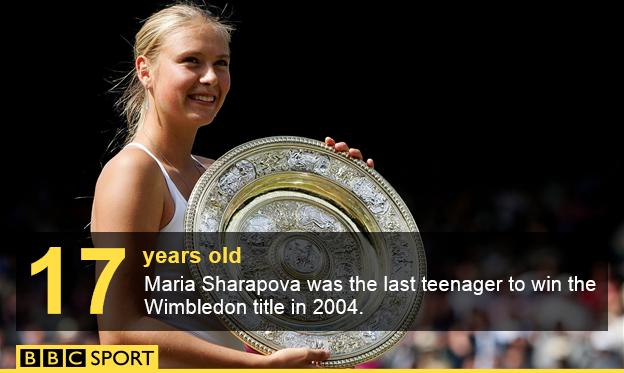 It is that sort of steely resolve that influenced her decision to join the WTA Tour after also clinching the girls' US Open singles title in 2013, despite being able to continue on the junior circuit for two more years.

"I won two Grand Slams and did everything I could on the juniors," she explained. "I couldn't improve there, so I decided to join the Tour.

"I'm still at an early age and have to get a lot of experience, but I think it was a good choice."

Not even extensive surgery on her elbow, which kept her out of action for four months last year, could stunt her growth.

Konjuh went on to reach the third round of Wimbledon at the age of 16, becoming the youngest player since Jelena Dokic in 1999 to do so, before losing out to former world number one Caroline Wozniacki.

And, through fate or faith, Konjuh earned her first senior crown against all odds.

"Everyone around me said that God gave me something," she said. "I was really happy to hear that and I hope to make the best of it. It's going to hold a special place in my heart, this tournament."

The next big thing in women's tennis?

At the age of 16, Monica Seles won the 1990 French Open and Martina Hingis won three out of four Grand Slam finals in 1997.

And, although Maria Sharapova won Wimbledon and Svetlana Kuznetsova claimed the US Open as teenagers in 2004, no ladies' singles Grand Slam champion has been younger than 21 since then.

Should Konjuh continue her ascent, she may well be the next big thing in the women's game.

Konjuh's potential is something that daunts those in her wake, too. She knocked out previous WTA title winners Alison Riske and Niculescu - no oldies at 24 and 27 respectively - to collect the Elena Baltacha Trophy.

Niculescu said: "To have a title at 18 - what's her age, 18?" Niculescu queried, before she was corrected and giggled. "Oh, 17! It's amazing. This is just the beginning for her."

But whether it takes her another six months or six years to reach the top, Konjuh remains determined to be clinking glasses with the tennis elite in future.