Three days into the 2015 Wimbledon Championships and Britain's Heather Watson is still waiting for her first day off.

Watson, 23, began her first-round match with Caroline Garcia on Monday but had to wait until Tuesday to complete it as bad light intervened.

The British number one returns on Wednesday, taking on Slovakia's Daniela Hantuchova on Court One at approximately 15:00 BST.

Watson's compatriot Liam Broady is also back in action.

Another sweltering day is in prospect, with the tournament record of 34.6C, set in June 1976, potentially at risk.

What to look out for on day three

Wildcard Broady returns having fought back from 2-0 down against Marinko Matosevic on day one to secure a victory he described as the best of his life.

His reward is a match with David Goffin on Court Three. The slight but skilful Belgian is at a career high of 15 in the world rankings.

Broady admitted after beating Matosevic that he had begun to doubt whether he would ever win at Wimbledon, but his victory earned the seal of approval of Andy Murray, who congratulated him on Twitter.

Watson, meanwhile, faces a woman who has reached the quarter-finals at the All England Club. But that was 13 years ago and she went out in the first round here in each of the past three years. 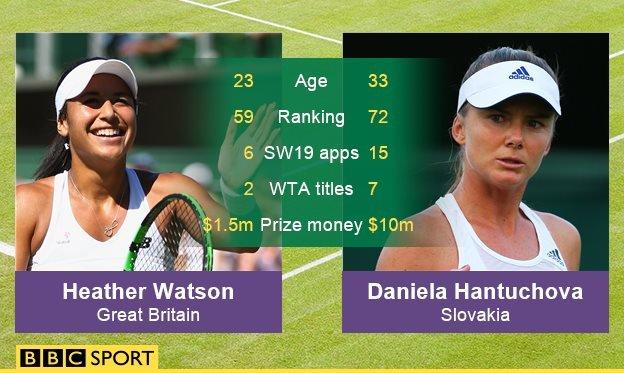 Another golden oldie, Venus Williams, will be looking to continue her resurgence against Kazakhstan's Yulia Putintseva. Her sister Serena faces Hungary's Timea Babos.

A stunning finale to Tuesday's action saw the number of British players through to the second round rise from one to five.

This is the first time there have been four or more men in the second round since Tim Henman, Andy Murray, Jamie Delgado, Martin Lee and Richard Bloomfield made it five back in 2006.

Murray, Aljaz Bedene and James Ward play on Thursday, so Broady and Watson - the lone British female through - will fly the flag on Wednesday. 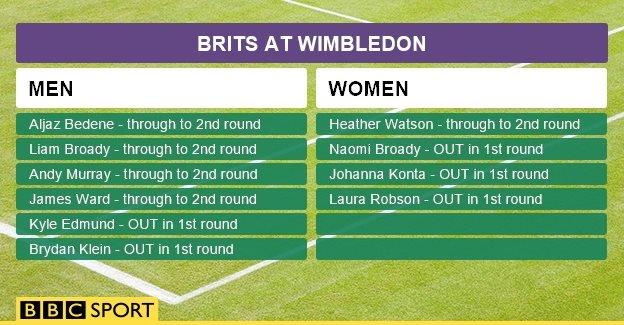 "I've got two tips for you to watch on Wednesday. Don't miss the big match-up between Tommy Haas and Milos Raonic. Haas may be 37, but he is no has-been. I just hope his shoulder can last against the relentlessly booming serve of seventh seed Raonic, who no-one will want to face in the later rounds if he gets through. Also, Heather Watson v Daniela Hantuchova could be a brilliant match. Watson did superbly to save those match points in round one and I think she will win in three sets." 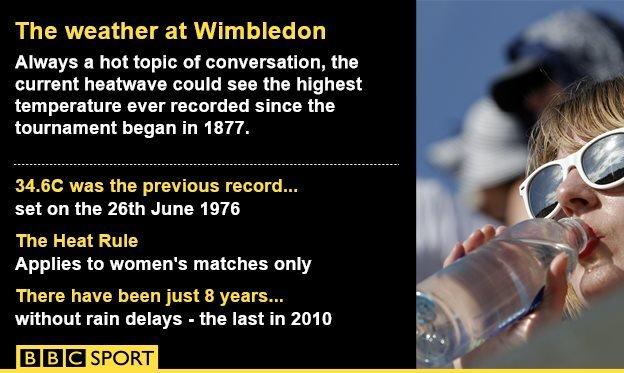 Quite simply, it is going to be another scorcher. Thermometers will be at the ready to see if the mercury rises to a new record temperature for the Championships.

BBC Weather predicts it will be tantalising close to the record at 33C.

The All England Club released a statement detailing the stipulations of their Heat Rule, which will come into operation for the ladies' players if the heat stress index is at, or above, 30.1C.