British number one Heather Watson saved three match points on her way to beating Caroline Garcia in the first round at Wimbledon, but Laura Robson was beaten on her return.

But the Guernsey player recovered and closed out the third set 8-6.

Fit-again Robson, playing in her first Grand Slam for 17 months, went down 6-4 6-4 to Russia's Evgeniya Rodina.

Edmund was unable to claim his first Wimbledon win as he lost in straight sets to Ukraine's Alexandr Dolgopolov. 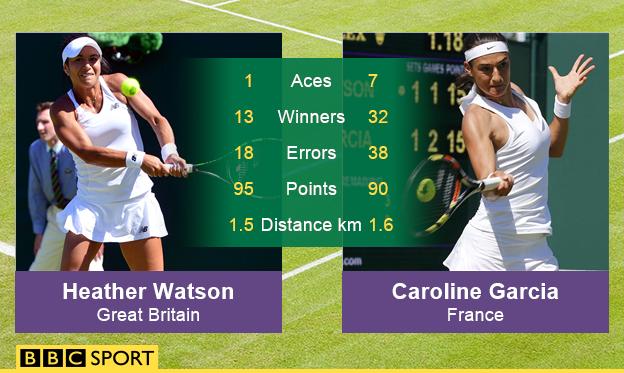 Watson had taken the option to stop play on Monday night and the pair returned in brilliant sunshine on a packed court 12 for an enthralling final set that the Brit eventually secured in 68 minutes.

"It was my first time ever stopping a match due to bad light - so it was a new experience for me," she said.

"It was the right decision to finish at the end of the set and come back today. I was pleased with my decision - especially now!"

The Briton saw four break points come and go in the fifth and seventh games but could not convert any of them and was docked a point for an obscenity.

Garcia was mixing big serves with wayward groundstrokes but began to find some consistency as play continued and put pressure on the Watson serve.

Watson had to save three match points in the 10th game of the final set, but the match quickly swung back in her favour when Garcia's serve crumbled.

The French 32nd seed immediately broke back to 6-6 but Watson was quickly back on the attack and made no mistake the next time she served for the match, wrapping up an impressive victory when Garcia put a forehand return long.

"I thought for a second that it maybe wasn't meant to be," said Watson.

"But I stuck in there and, before I knew it, it was now my turn to close the match.

"It was tense and I'm pleased that I was able to correct my mistakes the second time by serving out the match."

Robson was out with wrist and knee problems before making her return at Eastbourne last week.

She was given a wildcard for Wimbledon, a tournament where she reached the last 16 on her most recent appearance in 2013.

Robson, whose world ranking of 58 has been protected during her fitness problems, was backed by a vocal home crowd on court three.

After losing the opening set, she bounced back to break Rodina's first service game of the second set - only to hand that advantage back in the next.

Three break points were squandered in the fourth game, prompting shouts of frustration from the Londoner, along with looks of disgust towards her coaching box.

The pair exchanged five break points in the opening seven games, with Rodina then holding to move within one game of victory.

Robson missed two break opportunities, and survived a match point, before losing and departing to a warm reception.