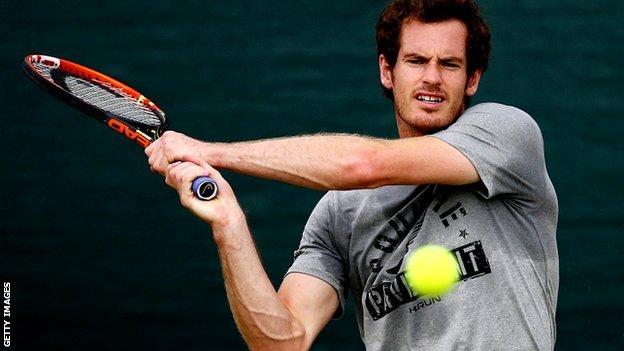 Britain's Andy Murray could be interrupted by rain when he plays Dutchman Robin Haase on Wimbledon's second show court on Thursday.

The pair's second-round encounter is the first match scheduled on Court One at 13:00 BST, with scattered rain showers forecast at SW19.

British number two Aljaz Bedene and number three James Ward will both also attempt to reach the third round.

Federer and Nadal could benefit from the Centre Court roof, with the Swiss second seed against American Sam Querrey and Spain's two-time champion Nadal taking on Germany's Dustin Brown.

They follow the opening match between former finalist Sabine Lisicki of Germany and American Christina McHale at 13:00.

Defending champion Kvitova and Kurumi Nara of Japan follow Murray's match on Court One, with the schedule completed by Jo-Wilfried Tsonga against Albert Ramos-Vinolas.

Play on the outside courts begins at 11:30, where British interest will centre on Ward opening play on court two against Czech Jiri Vesely, and Bedene facing Serbia's 22nd seed Viktor Troicki in the third match on court 12.

"I think everyone's picked their game up," Ward said of the British contingent.

"Everyone's been playing well coming into the tournament. Everyone's ranking is improving. It's good to have a few more guys playing well and winning matches."

Murray endured 41C heat during his first-round win over Mikhail Kukushkin on Tuesday, and his second-round opponent brought back memories of testing conditions at last year's US Open.

The Scot, 28, battled past Haase in four sets after suffering badly in the New York heat.

"I played him twice at the US Open and had two very difficult matches against him there," said Murray. "I played him once in Australia, where I played a very good match.

"The last time I played him in New York, I don't know exactly what happened, but I had terrible cramps from very early on in the match.

"It was a very tough match for me to get through, that one."

Haase, 28, won his first match against Murray in Rotterdam, but it was seven years ago and the Briton has taken the past three contests.

"Maybe it's a long time ago, but still, I beat him," said the world number 78. "I also played a few close matches.

"In a Grand Slam it's even more difficult to beat him, but I will try to find a weakness. If I can't find it I will still try to win."