Defending champion Novak Djokovic made short work of Finland's Jarkko Nieminen on a day when the temperature hit 41.2C on Centre Court at Wimbledon.

Canadian Raonic recorded the third-fastest serve in Wimbledon history as he beat Tommy Haas to set up a third-round match against Nick Kyrgios, who defeated Juan Monaco of Argentina 7-6 (7-5) 6-3 6-4.

It is a year to the day that Australian Kyrgios, 20, caused a major upset by defeating Rafael Nadal in the fourth round at Wimbledon.

Djokovic, who took just one hour and 31 minutes to win his match, told BBC Sport: "On this warm day it's good to spend a little bit less time out there.

"I'm glad with the way I'm playing and I'm getting into form. As the tournament progresses, hopefully I'll be able to elevate the level of my performances."

The match was a farewell to Wimbledon for Nieminen, who is retiring at the end of the season at the age of 33.

"I congratulated him for a terrific career," said Djokovic.

"He is a very nice guy, one of the nicest and a fighter on the court. It was a pleasure to be the last one to play him at Wimbledon." 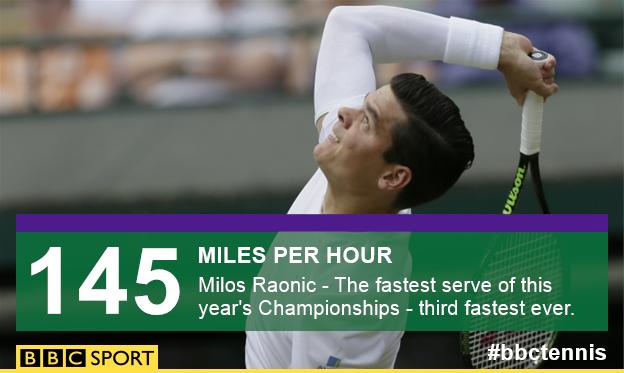 The 24-year-old Canadian sent down a 145mph serve against 37-year-old Haas on Court One, but it failed to eclipse Taylor Dent's 148mph offering from 2010 and fellow American Andy Roddick's 146mph from 2004.

Raonic, a semi-finalist in 2014, had three match points at 6-5 in the final set on the Haas serve, but the German battled back, only to lose it on the tie-break. 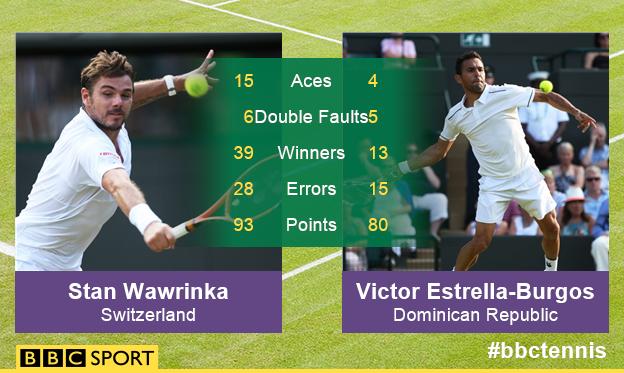 Swiss world number four Wawrinka, 30, who beat Djokovic in the final at Roland Garros, was barely knocked out of his stride against Burgos as he pursues a third Grand Slam title.

"He's a tough player. I didn't know exactly what to expect but I'm happy to get through in three sets," said Wawrinka, who will now face Fernando Verdasco.

"Verdasco will be a tough player, a lefty with an amazing forehand and loves to play on the grass here."

Ninth seed Cilic was made to work hard by Lithuania's world number 90 Berankis, but progressed to face the USA's John Isner.

"It was very thrilling. The match was high quality from both ends," said Cilic, who saved two break points at 2-2 in the decisive set.

"He was playing extremely well, hitting the ball well and causing me a lot of trouble. I had a little bit of a drama in the fifth set as I had to save some break points.

"It's pretty hot and you have to energise and hydrate yourself a lot."

The 24-year-old Bulgarian beat British number one Andy Murray in their 2014 quarter-final before losing to eventual champion Djokovic.

Dimitrov said: "I loved it out there. It was a great day to play tennis.

"I knew what to expect from Johnson. We have played each other a couple of times and also practised together, so nothing was new.

"I played Richard Gasquet in an exhibition match a few days ago. He is a great grass-court player.

"I know what to expect from him. It won't be a walk in the park but I like my chances."