British number one Heather Watson reached the third round at Wimbledon for the second time in her career with victory over Daniela Hantuchova.

Watson, the last British woman left in the main draw, had to deal with soaring temperatures on Court One on the hottest day at Wimbledon on record.

Andy Murray, Aljaz Bedene and James Ward will hope to emulate Watson's progress when they play their second-round matches on Thursday.

"I went 3-1 down and didn't panic," Watson told BBC Sport. "She played a few good games and I hit a few double faults to give it away, but I just stayed calm and brought it back. I definitely kept my cool better today. I was a lot calmer."

It is three years since Watson last reached this stage at Wimbledon and she will meet Williams, who beat Timea Babos 6-4 6-1, on the back of an impressive showing.

Just as she did in her first-round win over 32nd seed Caroline Garcia, Watson found herself behind early in the match but this time she quickly turned things around.

Watson double-faulted three times as she was broken early in the first set but she immediately put pressure on the Hantuchova serve and the 32-year-old crumbled.

The Slovakian was a Wimbledon quarter-finalist in 2002, and reached a career-high ranking of five, but she has slipped to number 72 in the world and her form deserted here.

There were plenty of empty seats on Court One but the British fans who were there saw Watson continue to play attacking tennis as she built a big lead in the second set.

She sealed victory with her second match point, when Hantuchova could only scramble a forehand into the net.

"I've never played Serena before, so I'd love to play her," added Watson. "But she's obviously a very, very tough opponent.

"But I feel in matches like that, you've got a lot to gain, so it's a real positive as well to play her. 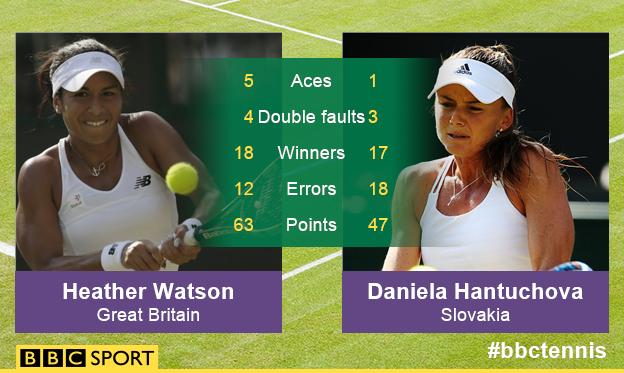