British number one Heather Watson faces the toughest match of her life on Friday, when she meets five-time Wimbledon champion Serena Williams in the third round at SW19.

Watson, 23, has never been beyond that stage of a Grand Slam. Ten years her senior, Williams is aiming for her 21st Grand Slam title and is on course for a so-called Serena Slam of all four majors in the same calendar year.

On paper, their first meeting is a huge mismatch - the world number 59 from Guernsey versus the top seed, who is currently the best player on the planet.

But, on grass, will it be a different story? BBC Sport experts Marion Bartoli, Justine Henin, Tracy Austin and Sam Smith look at how Watson might cause a huge upset. 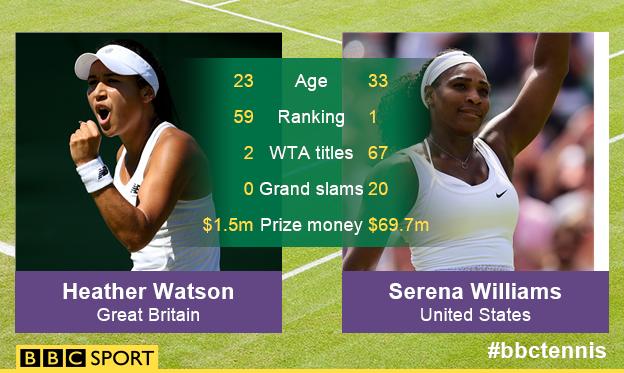 Bartoli, who ousted Williams in the fourth round at Wimbledon in 2011: "It is going to be very difficult for Heather. When I beat Serena, I served extremely well - it was probably one of the best matches I did on my serve.

"I went out and was really smashing the ball. That was my only chance, because otherwise the problem with Serena is she puts so much pressure on your serve because she is inside the baseline all the time and ready to hit a winner.

"The problem for Heather is she does not have a big serve. You have to put Williams under some pressure and, unfortunately for Watson, she does not possess those weapons."

Henin, who beat Williams in the Wimbledon quarter-finals in 2007: "Physically and mentally, Serena is the strongest. Every time she walks out on court, she knows she is the best.

"She also has the personality of a real champion. I always remember when I played her in the final of the Australian Open in 2010 and I was 15-40 on her serve in the second game of the third set. I was in a really good position - and then she served three aces at 190km/h.

"Only Serena can do it that way, and her fighting spirit is why she is still here and dominating on the tour at 33."

Smith, who reached the fourth round at Wimbledon in 1998: "Heather's performance against Daniela Hantuchova to reach round three was outstanding.

"But she will have to go up another three or four levels to be even remotely competitive against one of the greatest players of all time."

So, what hope does Watson have?

Austin, winner of the US Open in 1979 and 1981: "I've always said that if there is ever a time to face Serena in a tournament, it is early on. She has already had a little wobble in her first-round match.

"She will have to play at her absolute best. She needs a clear game plan and must stay focused point by point. She cannot focus on who she is playing and the aura of Serena Williams."

Henin, who won six of her 14 matches against Williams: "Heather has to believe she has got a chance. Playing Serena is like climbing a mountain but she has to be prepared mentally and physically, and be at her very best.

"Every time I played Serena, I always pushed myself to have a really good warm-up to try to increase the intensity of my game.

"That was important but also I always had a lot of discussions with my coach, talking about how I didn't have to be afraid of her, even if I was shaking a little bit when I was waiting to go out on court."

Could Watson return hold the key? 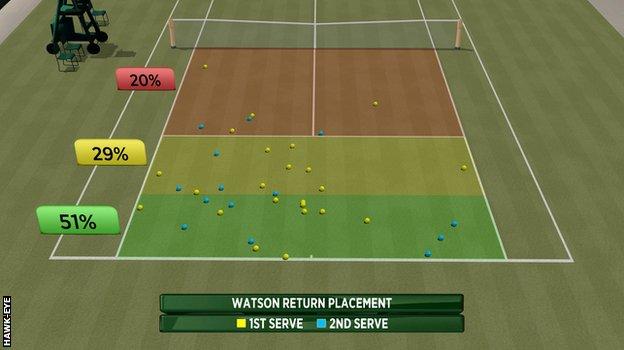 Smith: "Heather's return was particularly aggressive and effective against Hantuchova. At times, we saw her at her very best.

"It is going to be a lot tougher against Serena but it is something she has got to try and do again.

"More importantly, though, to begin with she just has to get a racquet on Serena's first serve and just get the ball in.

"The problem is that Serena has the hardest second serve in the women's game. Heather will have to try to get on top of some of those, but it will not be easy."

Austin: "Heather has to try to maintain her ground. Instinctively she will drop deep behind the baseline but she cannot afford to be pushed too far back by the Williams serve.

"She has to force herself to stay close to the baseline and try to hit the ball early."

Henin: "Serena gets a very high percentage of first serves in so as soon as you get any opportunity you need to attack her second serve, try to put her under pressure and try to get to the net.

"Not many girls do that against Serena, but she really does not like it."

Is Watson serve really a weakness?

Austin: "Heather has been working with Greg Rusedski this year to try to get more power on her first serve, and it has paid off."

Smith: "The biggest improvement in Heather's game this year has come with her serve. It has improved out of sight.

"She has got to serve well on Friday. Her second serve is not quite up to muster at the highest level and Serena will be hammering it.

"So it will be interesting to see what Heather does. Will she take a little bit off her first serve, or will she be as aggressive as she was against Hantuchova and just really go after them again?"

Can the crowd play a part?

Henin: "The home support for Heather could be one of the key factors in the match. The crowd will have a role to play and I am sure their support will be amazing.

"The flip side of that is how nervous Heather will be on the big occasion but she impressed me with the way she controlled her nerves against Hantuchova.

"She was playing with the crowd a little bit, but not too much and on Centre Court against Serena I think it will be the perfect situation for her."