British number four James Ward is into the third round at Wimbledon for the first time after beating Jiri Vesely, but fellow Briton Aljaz Bedene is out.

Bedene, in his first Wimbledon since switching nationality from Slovenia to the UK in March, lost 6-4 3-6 6-2 6-4 to Viktor Troicki.

But Andy Murray's progress means Britain have two men in the last 32 for the first time since 2002.

Heather Watson, the last home survivor in the women's singles, will play five-time Wimbledon champion Serena Williams in the third round on Friday.

Ward's progress comes in his seventh visit to SW19, and he hopes it will mean "a lot of people will get off my back".

He added: "I just can't put it into words. It's something I've wanted to do for a long time." 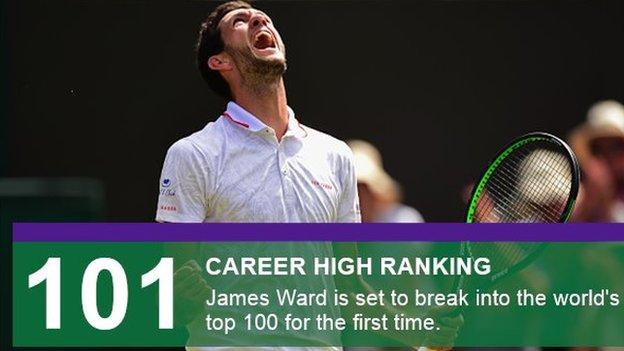 Ward, the world number 111, is guaranteed £77,000 in prize money even if he loses his next match - the biggest pay day of his professional career.

The Londoner's first-round win meant he was set to break into the top 100 for the first time no matter what happened against Vesely but, after a slight delay because of rain, he quickly showed he meant business on court two.

Ward made a confident start to the first set as 6ft 6in Vesely took time to get his serve into gear, and then came up with a big shot whenever he found himself under pressure from the world number 45.

That pattern continued in the second set, with Ward asking continuous questions with some thumping returns and tenacious baseline play, before eventually extending his lead in a tie-break.

Ward's only blip came in the third set, when the intensity and quality of his game briefly dropped off, but he recovered to resume control with the noisy backing of the home crowd.

This was only Ward's second career win against a top-50 opponent in a Grand Slam but, just as in his win over John Isner of the United States in the Davis Cup earlier this year, the big occasion again saw him produce his best tennis.

Ward, who has never gone so far at any other Grand Slam, plays Vasek Pospisil next after he beat 30th seed Fabio Fognini.

"The draw's opened up a little bit, you've got to take your chances when you can," he added. "Hopefully I won't stop here and can carry on.

"I have a lot of belief in myself and a lot of people do out there as well.

"It's all come from Davis Cup matches where I've done very well, and hopefully it can continue."

Bedene was given plenty of support from his adopted fans on court 12, but lacked the quality to seriously trouble 22nd seed Troicki.

The British number two, 25, was playing in the second round of a Grand Slam for the first time after beating Radek Stepanek on Tuesday.

He secured two breaks of serve against the former world number 12 in the first set, but saw them wiped out as Serb Troicki recovered to win the opener.

"Next year is going to be a different story," said Bedene. "I will be used to all the media attention.

"I just feel that next year I will be a different person for all the British people.

"They will get to know me more. It will be easier. Hopefully they will love me."

However he levelled the match after taking his third break opportunity in the fourth game of the second set.

Troicki stepped up his play in the next two sets, showing greater aggression and quality to edge past the world number 75,

Troicki, 29, dropped to 847th in the world after being given an 18-month anti-doping ban, but has worked his way back up the rankings in the past year.

He will play Dustin Brown in the last 32 after the German qualifier's shock four-set victory over two-time winner Rafael Nadal.