Defending champion Novak Djokovic powered into the fourth round at Wimbledon and is yet to drop a set in this year's championship.

They have been playing for four hours 16 minutes so far with the scores level before play was suspended for the day.

But the pair have a long way to go to beat the record for the longest match as Isner's victory against Nicolas Mahut in the first round of Wimbledon in 2010 saw play last 11 hours five minutes, with Isner winning 70-68 in the fifth set. 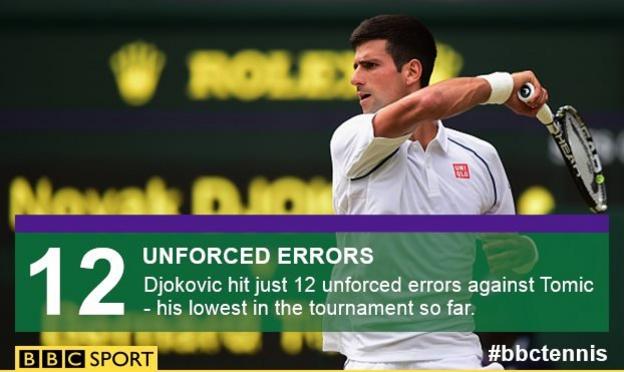 Djokovic has reached the second week of Wimbledon for the seventh year running by winning all nine sets he has contested.

As he left the court, he was inundated with requests for autographs - including one more unusual one.

"This gentleman gave me his artificial leg and I hope my signature will make him feel good," he said.

"It has been great so far. I was hoping I could play better and better as the tournament progresses and that is what is happening. As we are moving on, I feel more confident.

"My serve was very good today. I won a lot of free points and that takes away a lot of pressure. Maybe it looks like I haven't been tested but I have. I have played a couple of good players. It will get harder."

Wawrinka made quick work of his third-round match against Verdasco, the world number 42.

The 30-year-old Swiss, who beat Djokovic in the French Open final at Roland Garros, was barely knocked out of his stride as he continued his quest for a first Wimbledon title.

"I have the results so far - three sets each match. That's why I'm saying it's perfect matches. In Grand Slams, you have to win and to win in three sets, it's great," said Wawrinka, a Wimbledon quarter-finalist in 2014.

"I'm playing better and better. I've been serving really well since the beginning of the tournament, being really aggressive. It was a really solid match, I'm really happy with it."

Gasquet, who took less than two hours to defeat last year's semi-finalist Dimitrov, maintained his perfect record against the Bulgarian and faces Kyrgios in the fourth round.

The Frenchman lost in round two to the Australian last year, relinquishing a two-set lead and going down 10-8 in the fifth.

"It was an incredible match," he said, looking back 12 months. "It was very tough because I had nine match points and I couldn't do it, so it was a big match. Of course it was tough to lose. He played incredibly.

"Of course, after that he won against Rafa Nadal. It was a big thing for everybody. Of course it's revenge.

"Last year, even if I lost, it was a match we will never forget, me and him."

Raonic could not repeat last year's win over Kyrgios as he went down in four sets to the 26th seed.

Raonic, 24, who had won both their previous matches, was struggling physically having had foot surgery in May which kept him out of the French Open.

"The feet led to everything else. The feet are, I'd say, the instigator," said Raonic.