Wimbledon giant-killer Dustin Brown says he is not feeling under any extra pressure following his shock win over two-time champion Rafael Nadal.

The 30-year-old qualifier plays Viktor Troicki on Saturday, looking to reach round four for the first time at SW19.

"When I played Rafa on Centre Court, he was under more pressure than me, and again Viktor will be the favourite," Brown told BBC Sport.

"I will just go out and try to play my game, and see what happens."

The world number 102 has been under an intense media spotlight since his impressive win over Nadal on Wednesday, and says he has also been overwhelmed by messages of support and the public's reaction on social media.

"My phone is a complete mess. I did not even get through all my messages," he explained.

"A lot of famous people have been in touch which was great, first of all that they saw the match and also that they took the time to write to me.

"It probably still hasn't sunk in fully yet but, on Friday, I saw stuff in the papers and online and people were sending me things from back home in Germany.

"I realised it was probably the biggest win of my career, again." 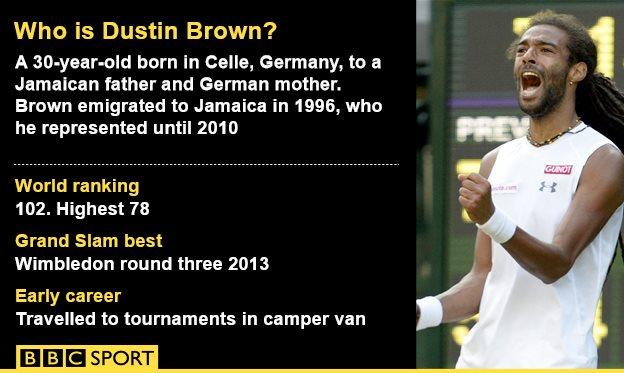 It is two years since Brown last made the headlines at Wimbledon, when he beat 2002 champion Lletyon Hewitt on his way to the last 32.

The 6ft 5in right-hander strikes a distinctive look on court with his long dreadlocks, and his unpredictable style has made him a big favourite with fans at SW19.

"It is nice to know people are supporting me," he added.

"I was very surprised that at some points in the match against Rafa, I was getting a lot of support out there - even though I was facing a player who has been on Centre Court a lot and has achieved more than most in the sport.

"But one match has nothing to do with the next one.

"I played Viktor twice last year and I think we both know exactly what we are going to get."