British number four James Ward's brave bid to reach the last 16 at Wimbledon ended in a thrilling five-set defeat at the hands of Vasek Pospisil.

Wildcard Ward, 28, was playing in the third round of a Grand Slam for the first time.

Ward, who is Murray's friend and training partner, gave everything as he tried to reach round four but fell agonisingly short. 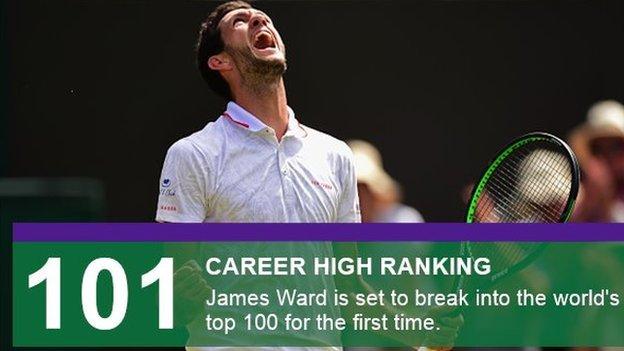 The Londoner still leaves SW19 with prize money of £77,000 - more than he had previously earned this year and the biggest paycheck of his career.

Ward, the world number 111, will also break into the top 100 for the first time in his career after his best ever showing at a Grand Slam.

But an already memorable tournament would have become a spectacular one had he managed to see off Pospisil, ranked 55 places above him, and extend his Wimbledon campaign to the second week.

Roared on by a noisy crowd, Ward struggled to live with Pospisil's power in the first set but visibly grew in self-belief as he turned the match around.

The volume on Court One increased as Ward took the third set, recovering to win one remarkable rally that gave him a crucial break point.

But he could not maintain his momentum in the fourth, with Pospisil rediscovering the rhythm of his booming serve-volley game as he levelled the match again.

The atmosphere became even more tense as the decider continued on serve and Ward was the first to crack at 6-6.

Pospisil sank to his knees after serving out his victory and will play Dustin Brown's conqueror Viktor Troicki next.