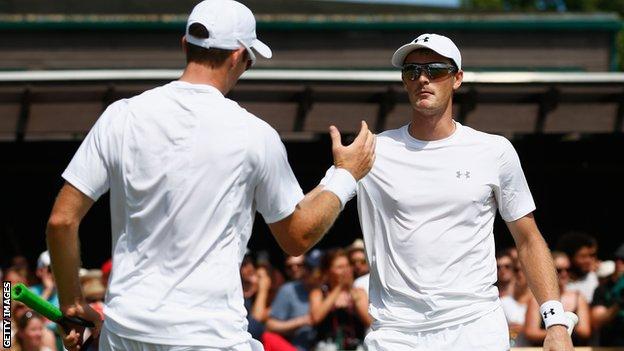 Jamie Murray joined his brother Andy in reaching a Wimbledon quarter-final as he moved into the men's doubles last eight alongside Australia's John Peers.

Pospisil will face Andy Murray in the singles quarter-finals on Wednesday.

The Canadian, 25, set up that meeting with a five-set win over 22nd seed Viktor Troicki earlier on Monday.

That victory took more than two and a half hours to complete, giving Pospisil a brief break before returning to court 12 alongside American Sock.

The North American pair, seeded third, levelled from two sets down before Murray and Peers edged the decider.

It is the first time that Jamie Murray, 29, has reached the quarter-final stage of the men's doubles at Wimbledon.

The Scot won the mixed doubles with Jelena Jankovic in 2007.