Day nine at Wimbledon 2015 is men's quarter-finals day - and the eight players in action boast 30 Grand Slam titles between them.

British number one Andy Murray plays Canadian Vasek Pospisil, who has already knocked out one Briton - James Ward - on Centre Court at 1300 BST.

What to look out for on day nine

Murray - the last remaining Briton in the singles - takes on world number 56 Pospisil in the first match on Centre Court.

Having never been past the third round at a Grand Slam before, 25-year-old Pospisil is in uncharted territory.

He has played three five-set matches so far in the singles and another gruelling five-setter in the doubles against Andy's brother Jamie, which meant he spent a total of eight hours on court on Monday alone.

Murray, 28, fully intends to take advantage of any signs of tiredness.

"He might be a little bit fatigued, but then again he's played so much tennis that he's going to be comfortable in the conditions and in a good rhythm," said the 2013 champion.

"If he is tired I'll obviously try to capitalise on that, but I won't bank on it."

Pospisil, who won the men's doubles title last year with Jack Sock, has caused a stir at Wimbledon this year by spending changeovers reading from a book of notes.

"I have been looking at the same page for the matches, but the book is getting filled up a little bit," he said.

"It's just reminders and pointers, things I should be looking at during the match, so that will change a little bit match to match."

Murray has won all three of their previous encounters in straight sets, two of which were this year at Rotterdam and Indian Wells.

Federer, meanwhile, has had nothing but superlatives thrown in his direction after sailing through the first four rounds with some breathtaking tennis as he chases a record eighth Wimbledon title. 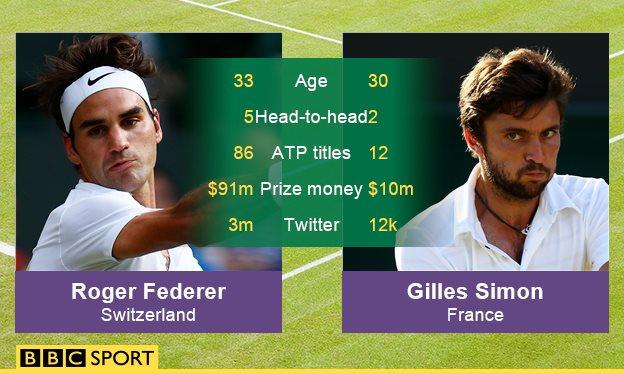 The 33-year-old's serve has been impregnable thus far - he has faced just two break points in 58 service games and sent down only three double faults.

Indeed the last time he dropped his serve was in his opening-round win over Philipp Kohlschreiber at the Gerry Weber Open in Halle, more than 100 service games ago. Typically modest, Federer joked his opponents until now have been "returning terrible".

Tasked with ending the Swiss' attempt to become the oldest Wimbledon champion in the Open era is Frenchman Simon. The 12th seed reached the semi-finals of Queen's last month.

Federer's compatriot Wawrinka is aiming to become just the fifth man to win the French Open and Wimbledon in the same year.

His match with Frenchman Gasquet is highly anticipated because both share a signature shot - the one-handed backhand - which both use to devastating effect.

Gasquet, the 21st seed, reached the semi-finals here in 2007, but faces a tricky afternoon dealing with Wawrinka's power. Their head-to-head record stands at one win apiece.

Djokovic is the hot favourite to beat Cilic. The defending champion is playing in his seventh straight Wimbledon quarter-final and has not lost in 12 matches against Cilic.

Djokovic beat him in last year's quarter-finals as Cilic threw away a 2-1 lead.

"I'm going to have to be more aggressive to play more risky tennis," said Cilic, whose coach is the 2001 Wimbledon champion Goran Ivanisevic. 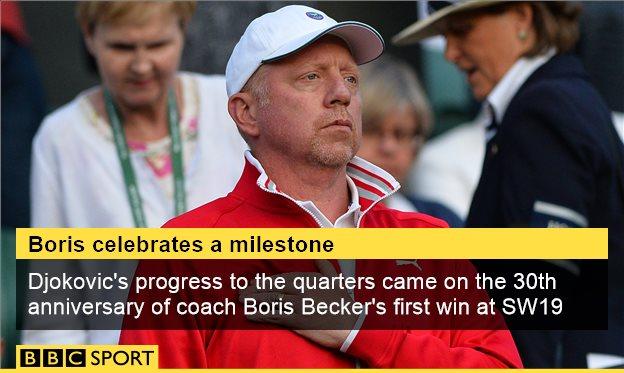 "Novak Djokovic's head-to-head record with Marin Cilic is 12-0, which speaks volumes. The defending champion had to expend a lot of energy to get past Kevin Anderson but the fact he did showed his mental and physical strength and I see him making it through.

"In the battle of the backhands, I think Stan Wawrinka will cruise through in straight sets against Richard Gasquet. He has just got too much firepower for the Frenchman.

"I can't see anything else but a straight-set victory for Andy Murray over Vasek Pospisil. The Czech played 10 sets on Monday in singles and doubles and I think this match will be one step too far for him. Murray is looking too good.

"As is Roger Federer - his match with Gilles Simon might be closer than some people think, but Roger will still win in three sets. " 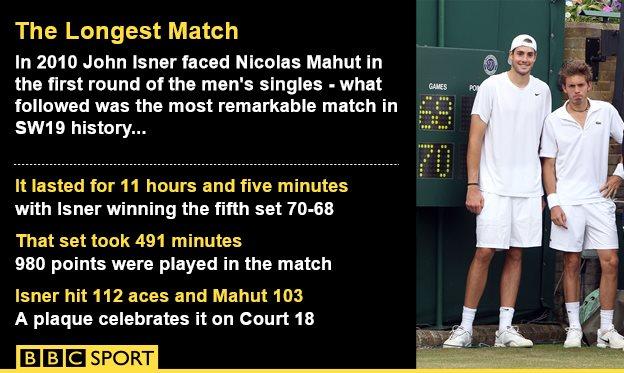 After sun, sun and more sun, Wednesday brings cloud on what is set to be a gloomy day at SW19.

However, no rain is forecast so play is unlikely to be affected. 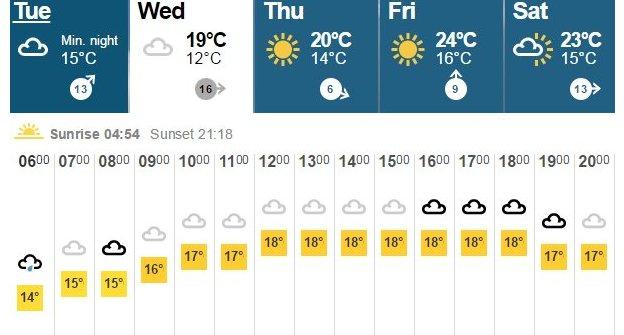