Britain's Jamie Murray ensured at least one Murray brother will be in the semi-finals at Wimbledon by reaching the last four of the men's doubles.

Jamie Murray, who won the mixed doubles title at SW19 in 2007, has never reached this stage of the men's competition before.

In his latest BBC column, Andy Murray said he rarely watches his brother play because he feels he brings him bad luck.

But their mother Judy was in attendance on court two. 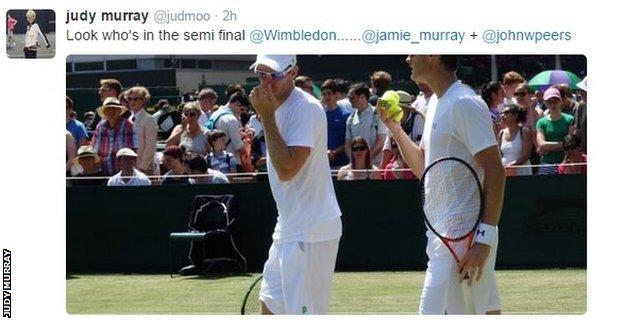 And Jamie Murray laughed off the suggestion his brother is a jinx, saying: "I've lost a lot of matches where he hasn't been there so I'm not quite sure that's true.

"He can watch if he wants to."

He and Peers will play Jonathan Erlich and Philipp Petzschner in their semi-final on Thursday after they upset second seeds Ivan Dodig and Marcelo Melo.

"This is a good breakthrough for us in terms of stepping up at the biggest tournament there is, and we'll keep trying to work hard and get better," added Murray.

"We've been going in the right direction over the last 18 months and I think we deserve to be where we are."