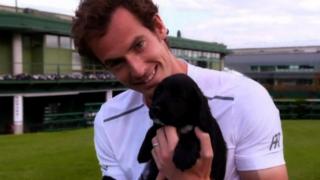 Murray is a well-known dog lover, and owns two Border Terriers called Maggie May and Rusty.

The 2013 Wimbledon champion also rescued a stranger's dog from traffic on his way to last year's tournament, as well as meeting CBBC's own Hacker T Dog.