Andy Murray will take on Frenchman Adrian Mannarino as three Britons attempt to reach the third round of the US Open on Thursday.

Murray, seeded third, will play the world number 35 in the third match on Arthur Ashe at around 20:00 BST.

Murray began his campaign with victory over Nick Kyrgios in a New York night match on Tuesday, but now faces a rather more low-key contest.

Mannarino, 27, might not carry quite the profile or explosive game of Kyrgios but Murray is braced for another test. 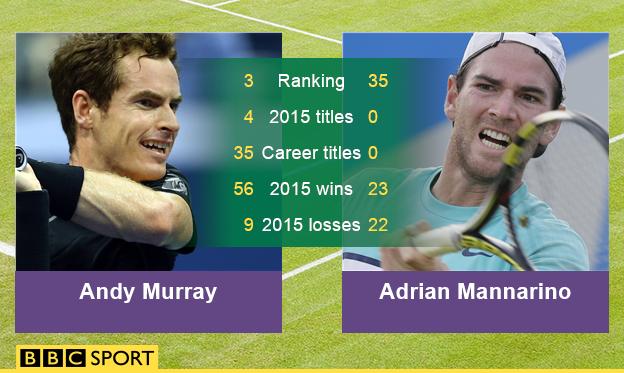 "He's a tricky player," said the Scot, who won their only previous encounter in Indian Wells earlier this year.

"He's a lefty. He hits the ball extremely flat off both sides and has very short, compact swings, excellent timing. He's quick, a good athlete with very good hands. He's a talented guy."

Mannarino said: "Last time he was clearly better than me. It's going to be very complicated but I'll try my best.

"I don't play this kind of guy every day, so it's also fun to see the difference between us and where I have to work."

Konta aims for 15th win in a row

Muguruza will go into the match as a strong favourite as ninth seed and fresh from a first major final at Wimbledon, but Konta is a dangerous opponent for anyone right now.

The Briton has racked up a stunning 14 wins in a row during the North American summer, claiming two challenger titles and coming through qualifying in New York.

Konta, 24, also has the confidence of knowing she beat Muguruza only three months ago in Eastbourne as she attempts to reach the third round of a Slam for the first time.

"The round before [in Eastbourne] I beat Ekaterina Makarova, who is number eight in the world, so that is my best win on paper," said Konta.

"I don't discriminate between my wins. I'm happy with every win I get."

The British number two is a man on the up, with a world ranking of 57 and now having won matches at successive Grand Slam tournaments.

The 26-year-old will fancy his chances of going further against Donald Young, after the American needed five sets in hot conditions to beat Gilles Simon in round one.

"I played Donald three years ago in Vienna and I beat him, so I know what to expect," said Bedene.

"We'll see if I can get my game onto the court."

And the Slovenia-born Bedene, who gained British citizenship in March, says he now feels part of the British group of players who have achieved some measure of recent success.

"It's the first time since 2006 we had three guys in the main draw, and we could have four or even five in the next year," he added.