Andy Murray said it was "tough" to see his run of 18 successive Grand Slam quarter-finals end with defeat by South Africa's Kevin Anderson at the US Open.

It is the first time since 2010 that Murray has not reached at least the last eight at a Grand Slam.

"That's obviously something that is disappointing to lose," said the British number one, 28.

"Many years' work have gone into building that sort of consistency. To lose that is tough."

Murray, seeded third, went into the match with a 5-1 win-loss record against Anderson but was playing catch-up from the moment the 6ft 8in South African saved three break points in game four.

Anderson fired down 25 aces as he kept Murray at bay for most of the first two sets, and then held off a fightback from the Scot to win in four sets. 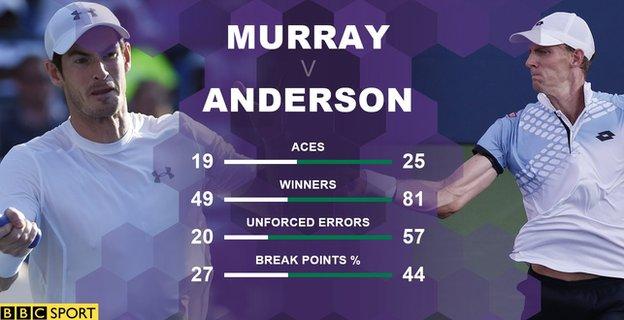 "He is an excellent player," said Murray. "It came down to a few points here and there. He served extremely well as he normally does, and that was it.

"I was down two sets and a break and fought unbelievably hard to get myself back into it. I'm proud of the way that I fought right the way through to the end."

It was Murray's first match of this year's tournament on the second show court, Louis Armstrong Stadium - the same arena that saw his last early Slam exit, against Stan Wawrinka in 2010.

"The match was a very long one, close," added Murray.

"I was trying to use the energy of the crowd as much as I could to help me. The atmosphere was very good.

"That court is a lot quicker than Ashe. I felt like I was on the back foot quite a lot and wasn't able to play that offensively."

The US Open was Murray's 15th tournament of the year, and Monday's match his 69th, with the added factor of two demanding Davis Cup ties in February and July.

Murray will next head to Glasgow, where Britain take on Australia in their first Davis Cup semi-final for 34 years, starting on 18 September.

"I've done my best in all the tournaments I've played this year," he said.

"We've had a great run in Davis Cup and that was a huge priority this year, and now being in the semi-finals it's a great opportunity for us.

"I have played a lot and when Davis Cup is done, I won't play much after it through to the end of the year."