World number two Simona Halep and Italian 26th seed Flavia Pennetta will meet in the US Open semi-finals after prevailing in absorbing three-setters.

Roberta Vinci and Serena Williams will contest Thursday's other semi-final.

With both Pennetta and her compatriot Vinci in the last eight, two Italian women have made the last four of the same Grand Slam tournament for the first time in the Open era.

Halep helped by the heavens

Halep looked in danger as her 26-year-old opponent came into the third set with momentum after winning the second in impressive style.

But a rain delay took the players off court for an hour and 25 minutes and Halep revived to reach the US Open semi-finals for the first time.

"I got behind the baseline in the second set and had to to do a lot of running. That break helped me. Thanks, God, for raining," she said.

In 38 appearances at the other three Grand Slam events, Pennetta has made the last eight just once.

However she has made the quarter-finals six times in seven years at Flushing Meadows and made only 16 unforced errors to Kvitova's 60 to progress to the semi-finals for the second time in New York.

"The second set I was really in trouble, but I just kept going," Pennetta said after her win over Kvitova, 25. "It's unbelievable."

She has won three of her four previous meetings with Halep.

Serena Williams paid tribute to sister Venus on social media after her win in Tuesday's quarter-final. 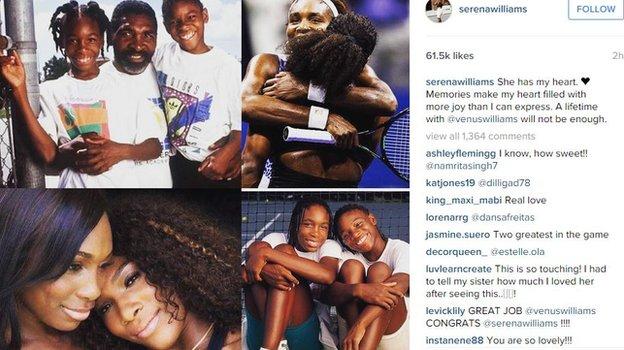 "When I heard my alarm I didn't want to wake up. Yeah, I'm kind of sleepy right now, as well." Petra Kvitova, who has been diagnosed with glandular fever, struggles for energy.

"We are old. I know. I mean, old for tennis. For the life we are younger." Flavia Pennetta, 33, reflects on the durability of herself and fellow Italians Roberta Vinci, 32, and Francesca Schiavone, 35.

"I didn't like to watch tennis until last year. Last year I started just to watch some players just to learn many things from them." Simona Halep doesn't take her work home with her.

"You forget something - the perfect 10." Halep takes on-court interviewer Pam Shriver to task after she forgets an important point on the CV of former gymnast and entourage member Nadia Comaneci. Fellow Romanian Comaneci was the first female gymnast in Olympic history to register a perfect score with a series of faultless performances at the 1976 Olympics.