Serena Williams's hopes of securing a calendar Grand Slam were ended in stunning fashion by Italy's Roberta Vinci in the US Open semi-finals.

Williams, 33, had been two wins from completing a clean sweep of all four majors in 2015.

Vinci, 32, will play Flavia Pennetta in an all-Italian final at Flushing Meadows on Saturday.

Saturday will see the first Grand Slam final between two Italian players since the Open era began in 1968. 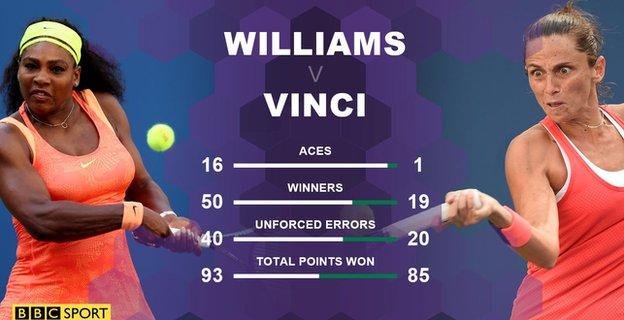 Serena boils over in deciding set

Williams's hopes of winning a first calendar Slam ended just two victories short, and in the most sensational of upsets.

The American had survived 11 final sets in Grand Slam matches during 2015, but at the 12th time of asking came up against an opponent who simply grew stronger.

When Williams smashed her racquet after dropping the second set it was clear that the tension was beginning to boil over, and her cries of "come on" in the third set took on an increasingly desperate air.

There was still the possibility that Vinci would crumble in the decider, but she served out to love with two nerveless half-volleys for the win of her life.

"It was an incredible match,' said the Italian. "I lost the first set, and tried to stay in every point. I tried to stay focused and not think about Serena. It is the best moment of my life."

Williams remains the holder of all four major titles for another 24 hours, having completed the "Serena Slam" at Wimbledon - she won the Australian Open in January, before taking the French Open title in June and Wimbledon a month later.

Spiky Serena not keen to talk

"I don't want to talk about how disappointing this is for me," said Williams in her post-match news conference, which lasted just four minutes.

"If you have any other questions I'm open to that."

On whether she felt the strain of winning the calendar Grand Slam, she added: "I never feel pressure and never felt that pressure to win here. I said that from the beginning."

Vinci, on the other hand, delighted the crowd with a charming on-court interview.

"I am sorry for the American people, for Serena, for the Grand Slam, but today is my day, sorry guys.

"When I wake up today I say, 'OK, I have a semi-final, try to enjoy. Don't think about Serena.' I did not expect that I win.

"In my mind I say, 'Try to put all the balls in play. Don't think about Serena in the other court. And run.' And then I won."

'One of the biggest upsets ever'

Two-time US Open champion Tracy Austin: "This is monumental. It's a shocker. This is one of the biggest upsets in the history of tennis, because of what was on the line."

Kristina Mladenovic, who lost to Vinci in the quarter-finals, tweeted: "Whatever happens now I kind of feel a bit better about my loss."

Laura Robson, the former British number one, on Twitter: "So that was totally the result we all predicted right?"

BBC Radio 5 live sports extra's Jeff Tarango: "I can't recall seeing in the history of women's tennis, the first and second seeds losing in the semi-finals of a Grand Slam."

Williams appeared edgy from the outset, dropping serve with her sixth error as early as game three, but when she reeled off five games to take the set it appeared the nerves had settled.

Her coach, Patrick Mouratoglou, had said he wanted her to "use the stress to lift her level" but it appeared to have the opposite effect in the second set.

Vinci's clever mix of spins and length played on the American's nerves and began to draw errors, a wayward forehand giving up the only break in game five.

Williams earned a break point at 5-4 down but Vinci fired a forehand into the corner and took the set, prompting the four-time champion to smash her racquet and receive a code violation.

By the time Vinci recovered an early break to level at 2-2 in the decider, Williams was screaming at herself just for winning points on serve.

Two double faults opened the door for Vinci to break in game seven, and when the moment came to try and close out the match, she produced the service game of her life.