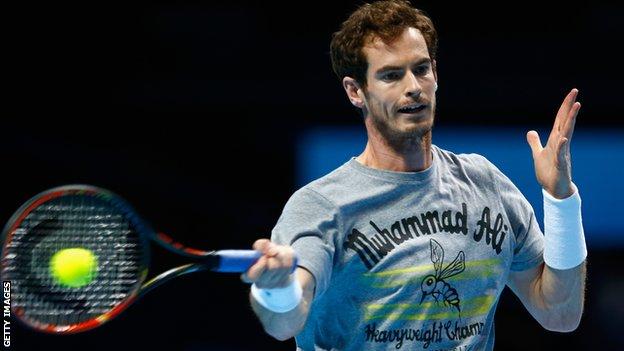 Andy Murray is among the top eight players in the world battling it out in London at the ATP World Tour Finals.

The 28-year-Scot finds himself in the Ilie 'Nasty' Nastase group, named after the fiery former world number one from Romania, who dominated the early editions of the world tour finals in the early 1970s.

Given that the current world leader Novak Djokovic and six-time winner Roger Federer are in the other section, there doesn't seem anything overly nasty about Murray's group.

The top two players in each section advance to Saturday's semi-finals, the top player from one group facing the second placed player from the other.

Murray's first opponent, in Monday's afternoon session, is one of the tour's fittest and most respected veterans.

They call him 'The Wall' because the ball always comes back. The 33-year-old Spanish world number seven likes to make his opponents work for their wins. And that is exactly what Murray has done against him lately.

He's going for his fifth straight victory over Ferrer, who hasn't beaten Murray since last year's Shanghai Masters. They met in Paris, immediately prior to these world tour finals, with the Scot securing a straight sets semi-final win in the French capital.

The other Spaniard in Murray's section is a much more familiar name.

With 14 Grand Slam titles to date, including nine French Opens, and a head-to-head record with Roger Federer which is 23-11 in the Mallorcan's favour, Nadal is one of the game's all-time greats.

His star seems to be on the wane, however: this is the first time in 11 years that he has failed to win at least one Slam title.

The 29-year-old has had injury problems over the years but is adamant it's just his form, rather than his body, that has let him down in 2015.

Recent results have been more encouraging and when he steps on court against Murray later in the week, he can reflect on the last time they met here at the 02.

Nadal won a thrilling semi-final in three sets, two of which went to tiebreaks. He's not a fan of indoor hard courts, but has nonetheless been a runner-up here twice, losing to Federer in 2010 and Djokovic in 2013.

The pair haven't met for a couple of years and you have to go back to the 2012 Japan Open for the last Murray victory over the Swiss number two.

Wawrinka tends to save his best tennis for the biggest occasions. He's won a Grand Slam title in each of the last two years, in Melbourne and then Paris, and has a deceptively weighty forehand to complement that famous one-handed backhand.

He's the current world number four and was ranked third for a spell last year. The 30-year-old Swiss has proven that his best tennis is more than a match for anyone on the tour.