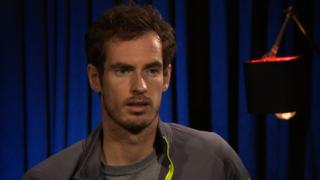 London finals a 'risk' for Murray

British number one Andy Murray says he understands the "risk" involved in competing at this year's ATP World Tour finals ahead of the Davis Cup final on 27 November.

Murray has been preparing for the Davis Cup final versus Belgium on clay but he believes the transition to the hard court at this week's finals in London might trigger his previous back problem.