Andy Murray suffered a collapse in form as a rejuvenated Rafael Nadal won their group match at the ATP World Tour Finals in London.

Nadal edged a tight first set and then raced clear in the second to win 6-4 6-1 at the O2 Arena.

The Spaniard's place in the semi-finals was confirmed when Stan Wawrinka beat David Ferrer 7-5 6-2 in the late match.

Murray plays Wawrinka in his last group match on Friday and can still progress.

"He was hitting the ball extremely well from the back of the court, but I didn't really help myself," said Murray, who made 29 unforced errors.

"I served poorly at the end of the first set and all through the second. That's not going to be good enough against him when he's playing that well."

Strange time for a haircut

At 2-1 down in the first set, Murray decided to cut the fringe of his hair during a change of ends.

"I don't know why such minor things make such a big deal," he said. "I had some hair in my eye, and I just wanted to get rid of it. That literally took two seconds. That was it.

The 28-year-old Scot will travel to Belgium next week for Britain's first Davis Cup final since 1978.

Murray practised on clay last week, with the Davis Cup in mind, before switching back to indoor hard courts and winning his opening match at the O2 against Ferrer on Sunday.

Another win would have assured him of the year-end number two ranking, but that will have to wait after he was outplayed by an impressive Nadal.

The Spaniard, seeded fifth, recovered an early break and began to dominate with his forehand, drawing errors from an increasingly frustrated Murray and punishing the Briton with some sharp finishing at the net. 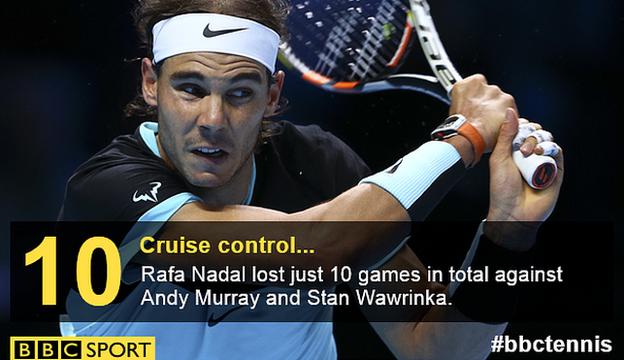 Murray clung on in the face of five break points but played a poor service game at 4-5 to fall 0-40 down, and Nadal closed out the set with a volley.

Neither man had been serving well but Murray's disintegrated in the second set, two double faults contributing to another break to love in game two.

By the closing stages he was winning just 10% of points behind his second serve and Nadal was happy to capitalise, breaking once again and firing away a forehand winner on match point.

"I served an extremely low percentage of first serves [43%], maybe the lowest percentage I have served the whole year in any match," said Murray.

Nadal said: "It's an important victory because it puts me in a good position to try to be in the semi-finals, and at the same time I have a big day against a great player on a tough surface."

Murray's side of the draw - the Ilie Nastase Group - is now relatively straightforward, with the Briton and Wawrinka facing a straight shoot-out for the runner-up spot at 20:00 on Friday.

Things are considerably more complicated in the Stan Smith Group, where Roger Federer, Novak Djokovic, Kei Nishikori and Tomas Berdych can all qualify on Thursday.

Six-time champion Federer is in the box seat after two wins already this week and he could well progress even with a defeat against Kei Nishikori at 14:00.

Three-time champion Djokovic knows any win will be enough against Berdych at 20:00, while the Czech must win in straight sets and even then could miss out.

The expert view from the BBC's pundits

Analyst Tim Henman: "It was a bad day at the office for Andy Murray but this round-robin format means he still has a chance to reach the semi-finals.

"He needs to forget what's happened here, focus on his next match and make sure he is in a better frame of mind to execute his game plan."

"I never thought we'd see him struggling as we have this year but it was a great display from him and he was beginning to dominate with his forehand again, which he hasn't done for a while."