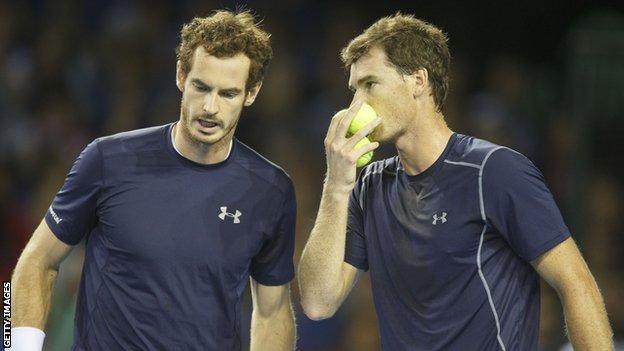 The International Tennis Federation says it is "greatly concerned" by the Belgian government's decision to raise the terror alert for Brussels, just six days before the Davis Cup final.

Great Britain are due to take on Belgium in Ghent, which is 35 miles to the north west of Brussels.

ITF president David Haggerty told the BBC in a statement that preparations for the final are continuing.

He added that safety remains the ITF's "highest priority".

"Over the last week, the ITF has been in constant contact with the relevant authorities, the Royal Belgian Tennis Federation, the Lawn Tennis Association and our risk assessment company and this dialogue continues today.

"We are aware that Belgium has raised the terror alert level for Brussels. This greatly concerns us but, at the present time, we are still continuing with preparations.

"What I said last weekend is true today: the security of players, fans, media and working staff remains our highest priority."

Anderlecht's game at Lokeren in the Belgian top division was cancelled but all other matches in the Pro League went ahead on Saturday.

Lower-league football, basketball and hockey matches in the Brussels region have been postponed, but the Ghent indoor Six-Days cycling event will continue over the weekend amid heightened security.

The British Foreign Office has updated its advice for citizens travelling to Belgium.

"People should avoid places where there is a high concentration of people, particularly in the Brussels region, including concerts, large events, stations and airports, public transport, and busy shopping centres," their website reads.

It is understood Great Britain captain Leon Smith has been canvassing the opinions of his players but, at the moment, the team are still expecting to travel as planned on Sunday.

The final will be played at the 13,000 capacity Flanders Expo from Friday, 27 November to Sunday, 29 November.

There is a precedent for the ITF to switch the venue of Davis Cup ties for security reasons.

Last September's World Group play-off between Ukraine and Belgium was moved to the neutral venue of Tallinn, in Estonia, because of the conflict in eastern Ukraine.

And Israel's tie with Argentina, which was played the same week, was moved from Tel Aviv to Florida due to concerns arising from the conflict between Israel and Hamas.

Those decisions were taken a month in advance, but followed advice from the ITF's independent risk assessment company and the lead taken by other sports in the region.