Belgium stand between Great Britain and their first Davis Cup title since 1936.

The British team were at their strongest at the beginning of the 20th Century and shone again in the early 1930s.

Since 1981, however, when Davis Cup organisers created a 16-nation World Group, with less successful nations split into regional Zone Groups, the GB record has been unremarkable.

They have experienced promotion, relegation and, occasionally, humiliation. 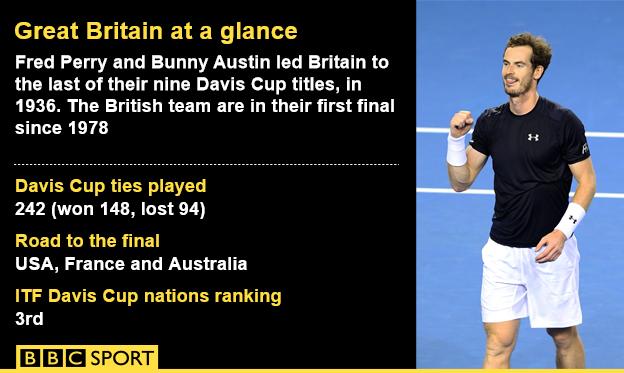 There was a 5-0 hammering by Slovakia in the third tier in 1995 and a 4-1 loss to Zimbabwe in London two years later after 1996 wins over Slovenia, Ghana and Egypt.

But a particular low point came five years ago when James Ward, Dan Evans, Colin Fleming and Ken Skupski were humbled 3-2 by Lithuania in Vilnius in Europe/Africa Zone Group II.

Ward, 23, was ranked 250th in the world, while Evans, four years younger, was 252nd as Britain sought their first Davis Cup win since September 2007. Ward won one and lost one singles rubber, while Evans was defeated in both of his.

"It's a tale of obstructed views," he said. "That match in Vilnius was played, basically, in a sports hall within a leisure centre.

"You went in as though you were going to the gym. There were no TV cameras at all.

"As catastrophic a result as it was for John Lloyd and his British team, Lithuania played well that weekend."

Doing without the star player

Lloyd had to make do without Andy Murray, who had pulled out two months earlier to focus on his individual career.

Murray said at the time: "I don't think it's a case of me abandoning Great Britain. I've played a lot of matches for them.

"You've got to do what is right for your tennis. That period of the year just before Indian Wells and Miami is very important for me." 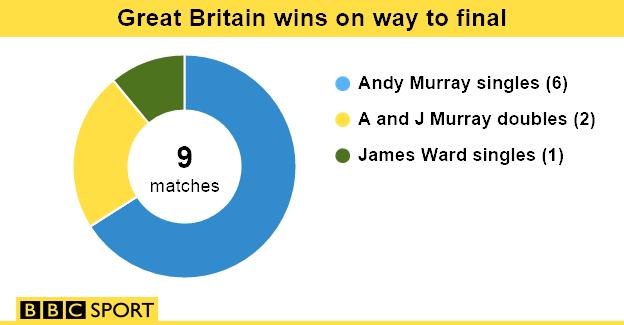 Lloyd, reflecting on the match recently on BBC Radio 5 live, said: "You have to look at the rankings we had with our players.

"Jamie Baker [world number 288] slipped on the Tuesday and was out of the match. I stuck Dan Evans in at the deep end. He froze a little bit, which was understandable.

"We have come a long way but the simple fact is that if Andy had played a few of those matches, particularly at the end, we wouldn't have been in that position."

Since then, Britain have won 11 out of 13 matches as Ward, Fleming, Skupski, Jamie Baker and Andy and Jamie Murray helped them gain promotion into Europe/Africa Zone Group I with 2011 wins over Tunisia, Luxembourg and Hungary.

Andy Murray, Fleming and Evans secured a place in the World Group with a 4-1 play-off win over Croatia in September 2013, and they beat the USA before losing to Italy in 2014.

The man in charge of the recovery since Vilnius is the team captain, Leon Smith, who was Andy Murray's coach for part of his teenage years.

He first joined the Lawn Tennis Association to coach the talented under-16s.

Aged just 34, the Scot took over in 2010 when Lloyd resigned after that defeat by Lithuania and was in post when the team beat Turkey in Eastbourne to avoid slipping into the bottom tier of the Davis Cup. 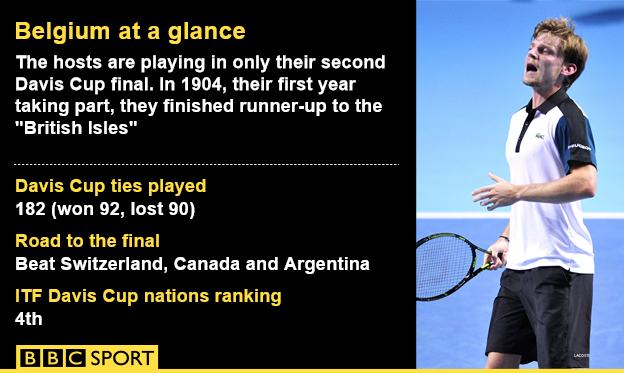 Britain's players look to have the edge over their opponents.

Belgium's Steve Darcis, 84th in men's singles, is the only Belgium team member other than Goffin to have a singles or doubles ranking in the top 100.

Great Britain have played Belgium 11 times in the Davis Cup and have won on seven occasions. On clay, the surface for this year's final, the record is 4-2 in Britain's favour. The nations last met in Glasgow in 2012 when Belgium won 4-1 on the hard courts at Braehead Arena.