Great Britain are one win from a first Davis Cup title in 79 years following Andy and Jamie Murray's doubles victory against Belgium.

Captains can change their nominations up until one hour before the 12:00 GMT start on Sunday, and Britain's Leon Smith could bring in James Ward for Edmund if it comes down to a fifth rubber.

Andy Murray: "I will prepare like any other match for tomorrow. Goffin is a world-class player and with the crowd behind him it will be a difficult match. We have two chances to try and win it tomorrow and if you had offered us that at the start we would have taken it." 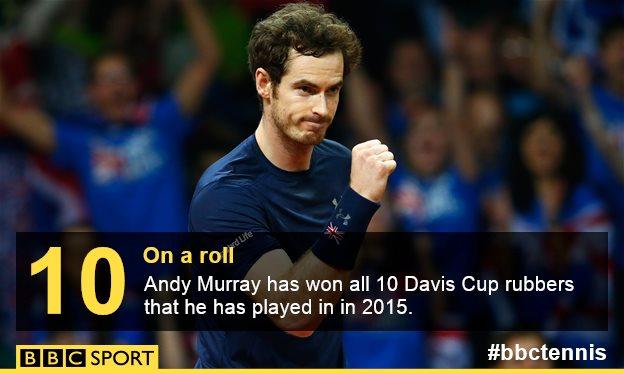 Jamie Murray: "There was so much noise, it was mental. We were shouting to each other at times but it's brilliant, and it's what you expect with so many passionate fans here for the final."

Leon Smith: "There was a lot of stress and tension. Picking Goffin didn't surprise us and we knew it would be a dogfight but our boys played better throughout and produced an excellent performance yet again."

Belgian captain Johan van Herck: "It's a difficult day tomorrow. But as a team we have to believe, we have to stand up, we have to fight."

Andy Murray punched the air while his brother exhaled in relief after the brothers won a tense encounter, and made it nine points in a row for the Murray family in this year's Davis Cup.

Van Herck had sprung something of a surprise by bringing in Goffin, a player with little doubles experience, and leaving out Davis Cup regular Bemelmans.

"We decided this morning after the warm-up," said the captain.

"My first plan was always to play David and Steve, but I wanted to see how David got out of his [singles] match.

"It was not for us the best tactic to go and play at the net and play real doubles, because I think the British were better. So we wanted to play from the back and make them play a lot of points.

"For sure, during the first three sets, we showed why it was the right tactic to do."

Andy the dominant Murray this time

After two tight opening sets were shared it appeared as though the Belgian captain might have pulled off a masterstroke with his selection when a flashing Darcis return put the hosts a break up in the third.

The majority of the very loud 13,000 spectators shook the Flanders Expo to its foundations, but their joy was short-lived.

Jamie, the elder brother by a year at 29, had excelled in previous rounds against France and Australia but he struggled for the first hour and a half on Saturday.

His serve was especially vulnerable, but he pounced at the net to level at 2-2 and the contest shifted decisively in Britain's favour.

There were five breaks in six games but the rock-solid presence on court was Andy Murray, who held throughout and served out the third set emphatically.

By now the weak link was Darcis, who was unable to hold serve in the third and fourth sets and double-faulted in giving up the key break early in the fourth.

Jamie Murray then survived a gripping service game of seven break points and, after Darcis was broken once again, it left the elder brother to serve out what could prove the decisive win of the weekend.

"I rushed a few shots that normally I wouldn't have done," said Jamie Murray. "Maybe that was the whole situation of the tie.

"Also I haven't played for five, six months on clay - it is different. But we made the adjustments and we finished the match really strong, I think."

Planning under way for final day

Edmund and Ward were out on court practising soon after the end of the doubles, but the watching handful of remaining British fans will hope they are not required.

Andy Murray has won both previous matches against Goffin and conceded just one game in Paris earlier this month.

"Tomorrow I have nothing to lose," said the Belgian rather unconvincingly.

Should Goffin pull off a huge upset and force a fifth rubber, it could be any combination of the remaining team members that take to court for the biggest match of their lives.

"You could argue it will not decide the tie, but it's a good position to be in, winning the doubles," said GB captain Smith.

"They did very, very well today. But I would rather be having two shots tomorrow rather than one.

"We go away and make sure that Andy and whoever goes out for the second singles is absolutely ready."