Great Britain have won the Davis Cup for the first time since 1936 after Andy Murray beat Belgium's David Goffin to clinch the decisive point in Ghent.

Britain have now won the team title 10 times, while Murray adds the Davis Cup to his other major titles at Wimbledon, the US Open and the Olympic Games.

The combined challenge of whistles, shouts, camera flashes and the weight of history could not derail Murray from his task - and neither could Goffin.

Goffin gave everything and extended Murray to two hours and 54 minutes, but there was no stopping the Scot, who was mobbed by his team-mates after landing the title with a brilliant lob and falling back on the clay.

"I just can't believe we did it," said Murray. "I play some of my best tennis when I'm playing for my country.

"We have to enjoy this because we may never get the opportunity again."

Captain Smith said: "It is amazing, as good a feeling as I could imagine. Andy has shown himself to be an absolute superstar.

"He will be the first to say that it is a team thing but what he has done is astonishing. I am proud of everyone."

Older brother Jamie Murray, who partnered Andy to victory in Saturday's doubles, said: "It's by far the biggest achievement of my career. I've had an amazing season and this is an unbelievable way to cap it off."

In another frenzied atmosphere at the Flanders Expo, Murray brushed off several early attempts to disrupt his service motion and set about stamping his class on the contest.

Goffin won just one game when the pair met in Paris earlier this month but already looked a much tougher proposition when he doubled that tally and saved an early break point.

Murray found himself under pressure at 2-2, facing a break point and more interruptions from the crowd, but he fired over a kicking second serve and shouted "come on" as the return flew out.

It heralded a spectacular few minutes of Murray at his best, a stunning forehand pass and two blistering returns helping him to break and another of those impossible winners taking him to 5-2.

Goffin played his way out of trouble impressively to save three set points on serve but Murray took his chance to close out the set with a forehand into the corner.

Strip away the prize on offer and the party in the stands, and the action on court was going as expected, with Murray the heavyweight to Goffin's middleweight.

The Belgian, ranked 16 in the world, fought well in the second set and gave his supporters reason to hope, but the pressure finally told in game 11 and a forehand found the net on break point.

Murray held his nerve from 0-30 to see it out, closing the set with another miraculous forehand from back on his heels, and when Goffin finally did break serve at the start of the third, the Scot hit straight back.

There was nothing more Goffin could do and Murray accelerated towards the finish line, breaking to love at 3-3 and then sealing victory on his second match point with a trademark backhand lob.

Andy Murray has relished the team atmosphere ever since Smith, his childhood coach, took over as captain.

The world number two has insisted throughout that this is not a one-man team, and James Ward and Jamie Murray have contributed vital points during the winning campaign, but the younger Murray's achievement sets him apart.

The 28-year-old joins John McEnroe and Mats Wilander as the only men to have an 8-0 singles record in a Davis Cup year, and with the doubles he is only the fourth man to win 11 rubbers in a single year.

Murray also matches his contemporaries in winning one of the sport's biggest prizes, having won more points along the way than Novak Djokovic (seven points in Serbia's 2010 win), Roger Federer (seven points in Switzerland's 2014 win), and Rafael Nadal (six points in Spain's 2011 win). 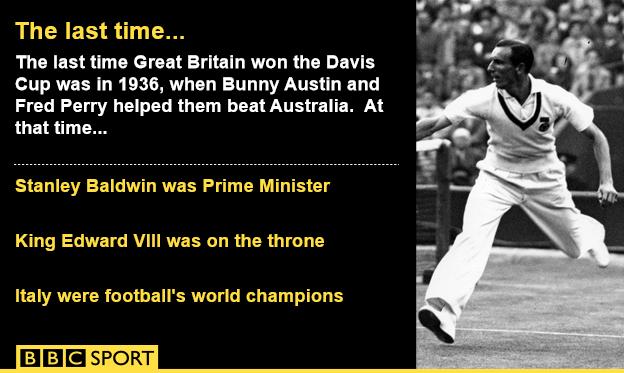 BBC experts on 'the most amazing achievement'

Former Davis Cup finalist and GB coach John Lloyd: "It is the most amazing achievement. We are champions of the world. Andy Murray's performance was absolutely staggering. We have to use this success to inspire people to play tennis.

TV commentator Andrew Castle: "Andy Murray has made himself a part of the best generation of tennis players of all time and this is another feather in his cap.

BBC tennis correspondent Russell Fuller: "Murray's individual contribution has been immense, but he has headlined a team effort that has been five years in the making. Strategy and team spirit have been expertly co-ordinated by captain Leon Smith, and many other players have won crucial points in the climb through the divisions."

Former British number one Annabel Croft: "It feels like this is so special and I will look back on it for many years to come. I have nothing but admiration for the Great Britain team and what they have achieved. What a privilege to be here, we will never forget that lob for the winning moment."

Novak Djokovic: Congrats #TeamGB on Davis Cup win! @andy_murray Seeing your reaction after winning made me relive again how it was for us in 2010. Well done, u deserve it.

Andy Roddick:Really impressive from @andy_murray. One of the best Davis Cup years in history.

JK Rowling: Tennis history made! @andy_murray is a superstar.

David Beckham: What an amazing achievement ... Congratulations to our guys it's been a long time since getting our hands on the Davis Cup but what a way to finish... Well done to the boys and all the team behind them for making us so proud ...

Gary Lineker: Britain wins the Davis Cup for the first time in almost 80 years. Perhaps now we can give @andy_murray the credit and plaudits he deserves.

Sir Matthew Pinsent:HUGE moment for GB winning one of the literally largest trophies in sport- congrats to the team bringing the Davis Cup home after 70+ yrs.