"Hopefully we will use this; we've got to inspire more players in Britain," Lloyd told BBC Sport.

"When they see this event, surely people will be inspired by it."

Lloyd was part of the last Great Britain team to reach the final in 1978, when they were beaten 4-1 by the United States in California.

But, led by world number two Andy Murray, the class of 2015 went one better as they brought the title back to Britain for the first time since 1936.

"It is the most amazing achievement when you think about where we were and where we are now - champions of the world," Lloyd added.

"Andy's performance was staggering. To go up against this crowd and to win in three straight sets - it's just tremendous."

Murray, 28, joins John McEnroe and Mats Wilander as the only men to have an 8-0 singles record in a Davis Cup year, while his doubles victories make him only the fourth man to win 11 rubbers in a single year.

His latest success follows him ending Britain's 77-year wait for a men's Wimbledon singles champion in 2013.

Behind him, the next highest ranked player in the team is Kyle Edmund at 110, with James Ward 156th.

"The responsibility is to take this success and to spread it. Share it and learn from it and tell people about it - and broadcast the message that this is great fun and a sport for life," said former British Davis Cup player Andrew Castle.

"If you've got the Davis Cup on the back of a truck, take it round and show it off - it was hard won."

Politicians were also quick to pay tribute to Murray and his team-mates, with sports minister Tracey Crouch saying: "This win gives a massive boost to British Tennis and I hope the LTA can capitalise on it and bring even more people into the sport."

The biggest trophy in the world?

There can be few - if any - trophies in the world of sport that weigh more than the 231 pounds the Davis Cup totals on the scales.

The Davis Cup is the only major sporting cup to have lasted a full century and has been presented 102 times since it was first contested in 1900.

Names of the players from both the winning team and the beaten finalists are engraved on the trophy, so the need for space has led to the addition of accompanying silver tablets on circular bases.

The third and most recent plinth, the largest, was added in 2002, increasing the height of the trophy to 3ft 7in. 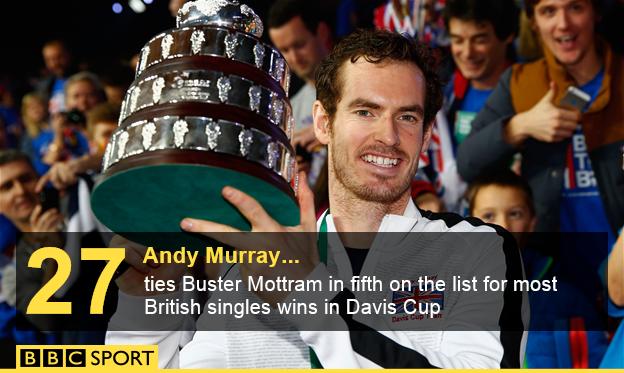 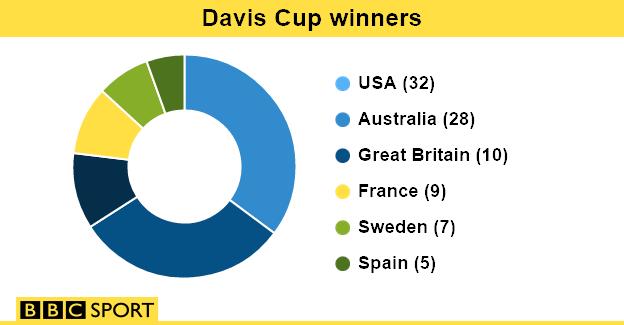 World number one Novak Djokovic: Congrats #teamGB on DC win! Andy Murray seeing your reaction after winning made me relive again how it was for us in '10. Well done, you deserve it.

Actor Kevin Spacey: Congrats Andy Murray on Davis Cup win! Makes 79 years fly by for GB when you play like that. Congrats to entire team!

Former England football captain David Beckham: What an amazing achievement ... Congratulations to our guys it's been a long time since getting our hands on the Davis Cup but what a way to finish... Well done to the boys and all the team behind them for making us so proud ...