A strange year of highs and lows has ended on a wonderful note after my boyfriend Radek took me by surprise and asked me to marry him, so Christmas will be even more special this year.

It's a lovely end to 12 months that have seen me go from winning titles to struggling for motivation, suffering with glandular fever and then finding my form again.

In the last few weeks I've been able to enjoy some time at home with my boyfriend and see my brothers and their kids, and I even managed to get all my Christmas shopping done early, which makes me very happy.

I like shopping, but when I see so many people in the malls it's not so appealing!

The last time I hit a ball in competition was at the Fed Cup final five weeks ago, but after resuming fitness training earlier this month I was back on the practice court in my home town of Prostejov on 16 December.

A new season is just around the corner.

I had three weeks off after the Fed Cup final and took my parents to Dubai for a few days. It was their first visit and really fun, although it flew past so quickly, but I'm glad they saw somewhere new and we were able to enjoy it together.

It was then time for me to start preparing for 2016 and I headed to Lanzarote for the first time with my fitness trainer, David Vydra.

We didn't do a lot of running but instead tried pretty much everything else over the course of a week. In the morning we would go biking and then in the afternoon we did other sports like squash, badminton, swimming, paddle tennis, volleyball...

Playing other racquet sports is a very different experience and I must admit I didn't like squash that much - I played for the first time and it was difficult for me. I prefer badminton.

We also bumped into my fellow Czech, Jan Zelezny, the three-time Olympic javelin champion who was out there coaching three or four guys. He's very famous in the Czech Republic and a very good guy. Javelin and tennis are about the only sports I didn't try in Lanzarote.

I did play an exhibition in Bratislava after the Fed Cup final but I stepped back onto court properly last week in Prostejov and just about managed to put the ball in the court!

You don't forget that so quickly, although it does take a few days to get your rhythm and feel OK again with no pain in the arm.

'Beating Serena was a great moment for me'

As I said before, it was a strange season but one with plenty of highlights. There was Madrid, where I beat Serena - that was a great moment for me - and went on to win the title, and also the US Open was good for me this year as I reached the quarter-finals.

I'd never really played that well in New York and I finally had some good results. I hope to have more success there; I'm trying every year and despite it being difficult conditions for me, I now know I can play well there if I am healthy.

The high point of my year was the Fed Cup at the end of the season as we beat Russia in Prague to defend our title again.

Unfortunately I didn't win my second singles match against Maria Sharapova, but I think it was really great tennis. The tie came down to a deciding doubles and it is difficult watching such an important match from the sidelines. 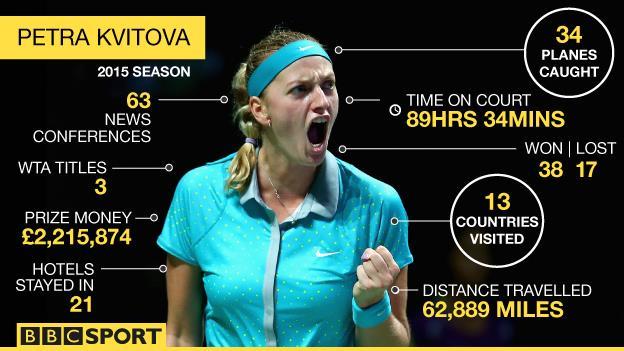 You really can't do anything except support and be with your team-mates. Karolina Pliskova and Barbora Strycova needed three sets and there were a lot of nerves out there, but I'm really glad that the girls made it.

It's a team competition and we really showed that we won as a team and not one individual.

'Andy was just great in the Davis Cup'

A few years ago I was kind of the big player in the Czech team and the one expected to win most of the points, and I think that was what Andy Murray experienced for Great Britain in this year's Davis Cup.

When I see the Czech Davis Cup team it's very similar, with Tomas Berdych leading the way like Andy does for Britain.

I watched a little bit of the final and it was very emotional how Andy won it. He was just great. But of course he needs the team to win the Davis Cup. He can't win it by himself. And he plays with his brother, which is very unusual and special.

It is very different representing your country as a tennis player. The week is always great and we have a fantastic atmosphere in the Fed Cup team among the players and support staff, which I think not every team enjoys. As the girls we are a good group. Nothing there is a problem.

Whatever we go through during the week, by the time the weekend comes around we are supporting each other from the bench.

'That passion for tennis is still there'

The tennis season is long and I think I lost a little bit of emotion for the sport at the beginning of this year. It was weird to be feeling empty on court and without any passion or love for the sport.

I took a month out and after the break I felt that passion again, which was a relief as I had been a little bit worried.

Tennis has been the major part of my life since I was 16 or 17 and moved to Prostejov, and I had to ask for an individual plan at secondary school so that I could train for tennis and play tournaments. I might have missed out on a few things along the way but I was OK with it.

It was difficult to finish school for sure, it was tough, but on the other side I'm really glad that I made it. That passion for tennis is still there, which is great.

Hopefully I can put my health issues behind me as well. I could still play despite the glandular fever but not practise as much as I wanted - but then I'm not a player who needs to practise for four hours a day. It was good that I was able to handle the situation mentally as well as physically.

I'm healthy right now and practising again, injury free, but we'll see. Let's hope it stays like this and 2016 can be a successful year.