It was a familiar ending, a habitual champion winning once again. The second best player in the world could not topple him, and seemingly no-one can.

The Big Four is now the Big One.

Novak Djokovic's record-equalling sixth Australian Open title was his third consecutive Grand Slam and the 11th of his career, putting him alongside two of the sport's idols, Rod Laver and Bjorn Borg.

A beaten Andy Murray, comfortably conquered in straight sets, smiled as he reached for the on-court microphone. "I feel like I've been here before," he quipped. Yet what to do about it?

It was the Serb's fourth win over the Briton in the Melbourne final, and his 11th in their past 12 matches.

But the complex puzzle of how to beat Djokovic in a Grand Slam is not only Murray's to solve. Roger Federer and Rafael Nadal, owners of 31 major titles between them, cannot crack the code and neither can anyone else, while the 28-year-old Djokovic has time to improve, to hunt more records, to become the greatest ever.

The Lionel Messi of tennis

Former British number one Andrew Castle likens the Australian Open champion to Barcelona and Argentina footballer Lionel Messi. They inhabit a different planet to the rest.

"The bar has never been as high in men's tennis," says Castle.

"I cannot believe what I'm watching and Novak Djokovic is undoubtedly moving towards being considered the sport's all-time greatest player, and that's quite something, particularly in this generation.

"I cannot think of a more eminent, more illustrious sportsperson in the world. There's Lionel Messi and his Ballons d'Or, and Serena Williams with her 21 Grand Slam titles, but I cannot think of anybody more notable than Djokovic. It's amazing."

Djokovic's ruthless accumulation of titles, winning four of the past five Grand Slams, is spellbinding.

For the past couple of years, the Serb has seemed to play with a cloak of invincibility, making a muggle of every elite player.

"He's always been a great defender but now he seems to be able to defend and hurt you at the same time. He's improved everything. His serve, he's better at the net - his coach Boris Becker has helped there - and in some ways his instincts are more aggressive."

In 2011 Djokovic won 43 matches in a row and collected three Grand Slams, but his statistics in 2015 were even better. He won 82 of 88 matches - a 93% win percentage - and the present-day Djokovic is more ruthless on the grandest of stages.

Last year, the man Becker describes as a "street fighter", won 11 of 15 finals and became only the third player in the open era to reach all four Grand Slam finals in a calendar year.

"Mentally, he doesn't think he can be beaten," says Lloyd.

The Becker effect - creating an aura

After losing three consecutive Grand Slam finals, Djokovic recruited six-time Grand Slam champion Becker in 2013 and the German, says Lloyd, has given his pupil an edge.

Djokovic has backed up this theory, revealing it was a pep talk from his coach during a third-set rain delay that was key to winning his third Wimbledon title against Roger Federer last year.

"To say Boris is confident in himself is an understatement and I mean that in a positive way," says Lloyd. "The night before a match they all have doubts, all the greats, just a tiny little bit, but when you have someone like Boris there it makes a huge difference."

Can the Serb be beaten in a Grand Slam? Stan Wawrinka was the only player to do so last year, beating him in the French Open final and preventing Djokovic claiming the only major that has eluded him.

The 34-year-old Federer, a 17-time Grand Slam champion and still the world number three, has been beaten in the last three Slam finals the pair have contested. Indeed, the Swiss last beat the world number one in a Grand Slam in 2012, the semi-finals at Wimbledon.

"It's going to take an unbelievable performance," says Lloyd.

"A player can have a day like Wawrinka did at the French, when everything just went in - it can happen. But Djokovic has an aura, which gives him an extra few points, even against Federer.

"Federer hasn't beaten him for a while in a best of five; Federer knows it, Novak knows it. With Federer you can never tell facially but I can guarantee there's doubt." 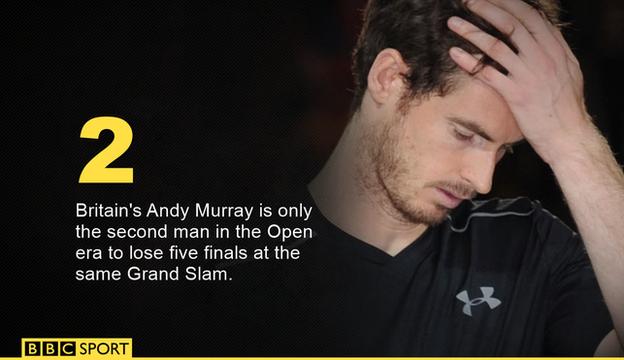 Murray has now racked up five losses in Australian Open finals and it's Djokovic who has been his tormentor on four of those occasions, as he often is against the Briton.

During the two hours and 53 minutes of Sunday's contest, the Scot created opportunities in the second and third sets but once Djokovic had eased to a 5-0 lead in the first, restricting his rival to five points in the first 20 minutes, the course of the match had been set.

Murray has played better, but was he bad? No, Djokovic was just superior.

"Murray came after him, he tried to be very aggressive, but Djokovic just blunted his attack and was able to dominate proceedings," says Lloyd. "The first set set the tone. I thought Djokovic was exceptional.

"I liked that Murray was going for the second serve more. Ironically, it cost him the third set tie-break when he got those two double faults, but that's the sort of thing he needs to do from now on.

"I thought his backhand was magnificent, his serve was very good. His forehand did break down a little bit and that was the one area he needed to be solid with."

Castle believes the Scot got his tactics "spot on", praising Murray's "superb" backhand and aggression.

"Against anybody else, Murray would have beaten them, but what happened? He lost in straight sets to Djokovic," says Castle.

"Murray's had a brilliant career but with Djokovic he's looking at a different level again and it's going to be fascinating watching Murray go forward."

The Scot has created history, ending Britain's 77-year wait for a men's Wimbledon champion and, last year, leading Britain to a first Davis Cup win since 1936, but can he catch Djokovic?

Castle believes "taking care" of the world number one is the last remaining goal of Murray's career.

"Andy will make whatever changes are required because he's that professional, but it will be a hell of a grind. It takes months to make the smallest of margins."

For Murray to succeed in Grand Slam finals again, Lloyd says the former Wimbledon and US Open champion must stop directing negative energy towards his coaching team.

"The mental side was what I thought let him down again," says the former Davis Cup player.

"There was far too much negative body language, looking up at his box. When you're doing that nonsense it's sending a message out and Djokovic is feeding off that. When Djokovic sees that, he's thinking 'I've got this guy'.

"He's got to cut that out if he's going to beat Djokovic. I'd replay that match to him and show him what he looks like - I'd show that to him until he's sick of it, so it'd just be like watching a horror film.

"I'm not saying he should be a robot, but the energy needs to be far more positive. He won two Grand Slams with his previous coach Ivan Lendl when he cut all that out. It's in his hands."

Murray was expected to board the first flight back to the UK to be with his pregnant wife Kim, and should he need guidance on combining fatherhood with on-court success he need only look at Djokovic, father of 14-month-old Stefan.

Fatherhood, after all, has not stopped the Serb chasing history.

He will again set his sights on winning a calendar Grand Slam and, should he do so, will draw level with Nadal on 14 Grand Slams. After that? Federer's 17 titles, which both Lloyd and Castle believe is an achievable target. 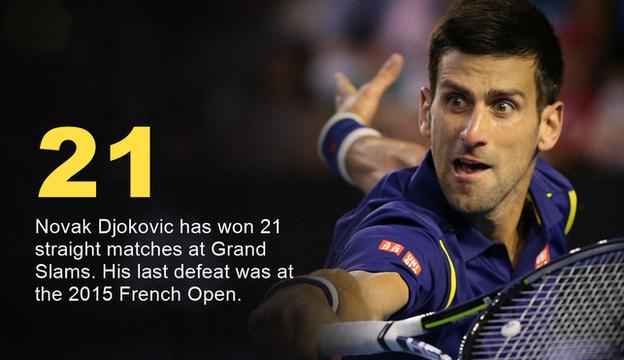 "He's got to keep the hunger," says Lloyd. "At some stage the desire to train four hours every day ends, but at the moment it hasn't.

"Players, whether they say it or not, love records. He's equalled Laver and Borg, he wants to win the French Open and wants to become the greatest player of all time. These are all incentives. They have to have something to keep motivating them and this guy wants to break records.

"He's still got another four great years in him. If he can keep the focus who knows how many more he can win."