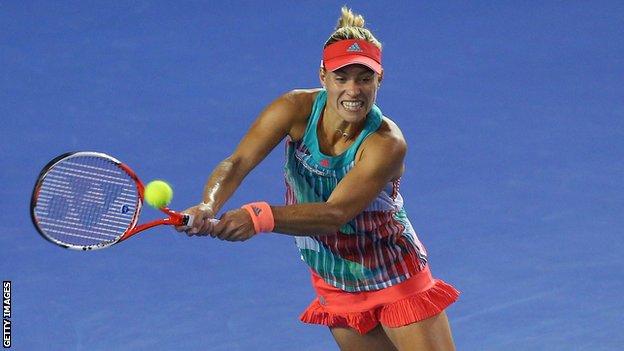 World number two Angelique Kerber lost 7-5 6-1 to Zheng Saisai in the second round of the Qatar Open, her first singles tournament since winning the Australian Open.

Top-seed Kerber, 29, who also lost to Belinda Bencic at the Fed Cup earlier this month, hit 38 unforced errors as the world number 73 dominated.

"I was not feeling my game and not finding my rhythm," German Kerber said.

Third-seed Agnieszka Radwanska and fifth-seed Petra Kvitova also progressed to the third round.

After the match, Kerber revealed that her plan to have her Australian Open trophy - her first piece of Grand Slam silverware - sent to her via recorded delivery had backfired.

She still has not been reunited with the Daphne Akhurst Memorial Cup after opting not to take the 10kg trophy in her hand luggage on the flight home from Australia.

"It's stuck in Warsaw," she said. "But I hope to get it soon and I'm really looking forward to it."