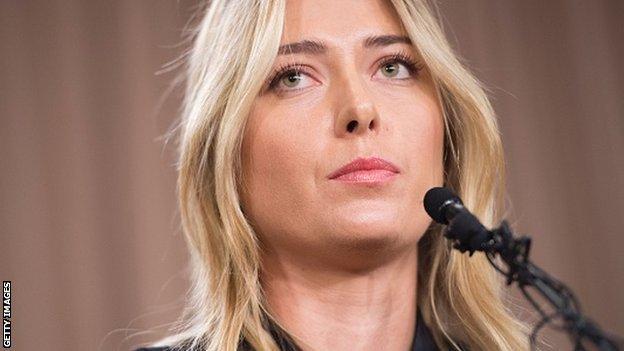 Black blouse, pale face. That was Maria Sharapova as she announced her failed drugs test.

And the reaction to her carefully scripted words has been equally as polarised.

From the believers: Maria has made a mistake. She is a good person. We could all have done it.

From the other: doesn't this all sound rather familiar?

Sharapova, a woman so focused on the small details that, according to her long-time agent Max Eisenbud, she will peel the label off bottles of water she drinks in nightclubs just in case someone takes a photo of her with a product she has not yet endorsed, has attacked this storm as she does a struggling opponent on court.

Announcements of failed tests are supposed to come from the sport's governing body. That can leave time for rumours to swirl and opinions to harden. Consider everything Sharapova did in that Los Angeles hotel on Monday in that light.

The backdrop: beige curtain. Sober. Calm. The outfit: black shirt with long sleeves, long black trousers. An ensemble for mourning, an image of gravity and abstinence.

There is no room in that legal process for emotion. Which is why an athlete looking for sympathy and leniency will introduce it as soon as they can.

The first six words Sharapova spoke appeared to be beautifully chosen. "I wanted to let you know..." Personal. Thoughtful. Not "I have been forced to…" or "You would have found out anyway", but an act of choice, an almost moral decision to keep us informed.

"…that a few days ago I received a letter from the ITF that I have failed a drugs test." The introduction of the idea that it is all new to her, that she has been taken by surprise; that this is something happening to her from the outside.

"For the past 10 years I have been given a drug called mildronate by my family doctor…" Not Sharapova choosing to take it. Not a dodgy pharmacist or lab rat, but a family doctor.

"A few days ago, I found out it also has another name, which is meldonium, which I did not know." Not that the drug was on the World Anti-Doping Agency (Wada) watch-list for the whole of 2015, or that it was announced in September that it would be banned, or that Sharapova received an email to that effect six months ago.

Instead, confusing old science. No reference to Wada's announcement of its 2016 prohibited list, released on 16 September 2015, which prominently contains this sentence: "Meldonium (mildronate) was added because of evidence of its use by athletes with the intention of enhancing performance."

"It's very important for you to understand that for 10 years this medicine was not on the banned list, and I was legally taking this medicine."

A solid reference to the legality of taking it, rather than the fact that meldonium has never been approved by the Food and Drug Administration for use in the US, where Sharapova has lived for the past 21 years, or that the use of a drug to treat chronic heart failure seems curious in an otherwise phenomenally fit young woman.

And so it went on. The idea that the essence of the crime was not to click on a link in an email sent by Wada, when everyone listening to her around the world also regularly does not click on links in emails.

You might find all this too cynical. You might point out that Sharapova has spent so long carefully constructing her commercial image - she has been the highest-paid female athlete in sport every year for the past decade, despite less than 20% of those annual earnings generally coming from prize money - that she would never do anything to jeopardise that brand.

Perhaps. You might feel that Wada should do more to make athletes aware of changes to the banned list, or that someone in Sharapova's team should have helped her out. She's a tennis-obsessed woman of 28. How can she possibly stay across her emails?

Or you might look at the figures, where Wada's annual budget is $25m - less than Sharapova routinely makes from her endorsement deals alone - and wonder where else the sympathy might lie.

You might look at the basic and long-established protocol that every elite athlete is personally responsible for what is found in their body, or the fact that there have been 55 positive tests for meldonium in 2016 alone.

Or that Abeba Aregawi, 2013 world 1500m champion, has also tested positive for a drug well known to aid endurance and recovery, or that a 2015 study revealed that 724 of 4,316 Russian athletes tested were found to have meldonium in their system.

Maybe Sharapova is unlucky. Maybe there is an epidemic of heart disease among elite athletes, or that some of those others are cheating when Sharapova has merely been a little lax with her admin.

Maybe it is all too reminiscent of other cases from down the years for others to take her words at face value.

At the 2003 World Athletics Championships, US sprinter Kelli White tested positive for modafinil after winning 100m and 200m gold.

It was, she explained, a treatment for the sleeping disorder narcolepsy and had been prescribed by her doctor, Brian Goldman of San Francisco.

"I know I that I did nothing wrong and sought no advantage over my competitors," she told a hastily assembled group of journalists, wearing a sober black outfit and choosing her words carefully. "I am confident that things will work out in the end."

White later admitted to not only taking modafinil to aid her performance, but also designer steroid THG and banned blood-booster EPO.

Sharapova is not Kelli White. There is no suggestion that she has taken any other performance-enhancing drugs. There are echoes, all the same, just as there are every time an elite athlete tests positive and attempts to take control of the fierce rally that follows.

So you might believe her. You might not. Three of her biggest sponsors, Nike, Tag Heuer and Porsche, have already put significant distance between themselves and their former ambassador.

But do not let it become about how much you admire Sharapova as a player or personality, or how she presented this to the world. There is one immutable rule in the anti-doping battle: it does not matter how much you like an athlete; they can still be looking for an unfair advantage. To believe anything else is to be both naive and ignorant of precedent.