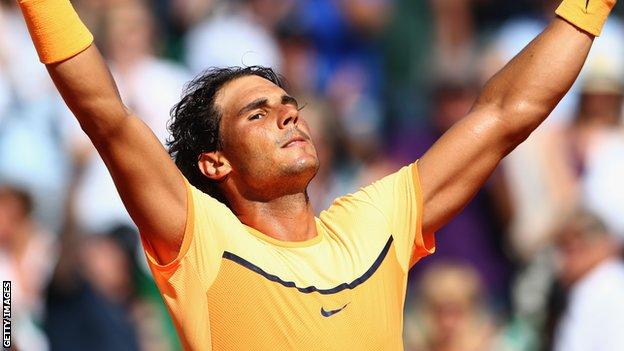 Murray broke twice to take the opening set but wilted under the Spaniard's power and accuracy to lose 2-6 6-4 6-2 after two hours and 44 minutes.

The win was Nadal's seventh over Murray in eight meetings on clay and puts him into his 100th ATP World Tour final.

Murray beat Nadal for the first time on clay in last year's Madrid Masters final, but his hopes of being only the third player to earn back-to-back victories over the world number five on the surface were dashed in a brutal two-and-a-half-hour encounter.

It was a match high on quality but also rancour, with both players being irked by some controversial umpiring decisions.

The match began bizarrely when Murray won the coin toss, but umpire Damien Dumusois of France asked Nadal if he wanted to serve.

Nadal pointed out the umpire's error, but Murray graciously asked for it to be re-done, and he won that, too. This time he was asked his preference and elected to serve.

Murray was irked throughout by a lack of action from the umpire over Nadal continually breaking the 25-second rule between serves. The Spaniard was averaging 31 seconds, allowing him more time to recover.

The Scot's patience was further tested midway through the third set when Nadal delayed his serve by claiming he had something in his eye. At the next changeover, the umpire asked Nadal if he wanted more medical attention.

Murray felt Nadal was getting preferential treatment and, after dropping his serve, hit the ball towards the umpire's chair in frustration, prompting Dumusois to say "you have zero respect for what I do". Murray responded by telling the umpire he didn't know what he was talking about.

Dumusois eventually gave Nadal a time violation in the final game, but Murray felt it should have been given earlier in the contest.

Asked about his clash with the umpire, Murray told the press conference: "You can draw your own conclusions. I don't know how much bearing it all had on the outcome.

"When you are losing at the end, it is easy to get frustrated."

Murray out of the traps

The Scot had begun in carefree fashion and played faultless tennis in a blistering opening set, with his opponent having no answer to his accurate serving and punishing ground strokes.

He won the majority of long rallies and regularly using the drop shot to drag the Spaniard around the court.

Nadal could not keep pace with Murray's physical intensity and earned a rebuke from the umpire when his entourage appeared to offer some courtside coaching.

Murray broke to lead 4-2 and then again on Nadal's next service game to take the set 6-2.

The Spaniard regrouped, however, and broke Murray in the opening game of the second set only for the Scot to break back immediately.

Both players were on their limit but it was Murray who was to crack first as his serve, which had been commanding in the first set, began to falter under increasing pressure.

Nadal drove him further and further to the back of the court with punishing backhands and broke decisively at 5-3 before levelling the match.

Murray's resistance was now broken and he began to lose focus. He dropped his serve twice to trail 4-1 in the third, and although he fought to the end he couldn't knock Nadal out of his stride and the Spaniard took the match on his fifth match point.

Nadal said: "It was a great match. Andy played great tennis in the first set and I made him play even better. I needed something else - more intensity in my shots and I did that.

"The second set was close and anything could have happened, but I had more intensity and my shots were harder and longer and that was probably the difference."

Speaking about reaching his 100th ATP World Tour final, he added: "It is a great feeling. This is a very important week for me. This is one of the great tournaments in my career and being in the final makes me very happy."

Monfils started underdog against compatriot and eighth seed Jo-Wilfried Tsonga in the other semi, but took advantage of his opponent's sluggishness around the court to dominate throughout.

Tsonga was a shadow of the player who beat Roger Federer in Friday's quarter-final and even when he managed to break Monfils to get back on serve at 4-3 in the second set, he immediately lost his own again, allowing his compatriot to close out the match in comfort.

Never want to miss the latest tennis news? You can now add this sport and all the other sports and teams you follow to your personalised My Sport home.