Three years ago, Andy Murray did not even make it to Roland Garros because of a persistent back injury which had flared up in Rome 10 days earlier.

This year, he starts as a genuine title contender and with a recent clay court record second to none.

The Italian Open champion has won more matches than both Novak Djokovic and Rafael Nadal in the three clay Masters events leading up to the French Open.

Crucially, Murray is now able to play his natural game.

He is no longer compromised by his back or by his movement, he trusts himself on clay, and the results have been remarkable.

Murray has always felt he needed to play himself in on clay, but, all too frequently the courts changed to grass just as he was getting his eye in.

He was also hindered by that lower back injury, which started troubling him as early as 2011.

Clay puts greater strain on the back. It is a slow surface, which requires greater rotation to impart the same amount of power.

Murray was too often in discomfort, so he decided surgery was the answer.

The operation in the autumn of 2013 was a success and opened up possibilities on a surface that had appeared likely to remain his weakest suit.

Fast forward to Munich last May and the sight of Murray donning a pair of lederhosen to celebrate his first clay court title.

He then beat Nadal on home soil to win the Madrid Masters the following week, then won all three of his matches on clay as Great Britain beat Belgium in November to clinch the Davis Cup.

After a semi-final exit in Monte Carlo this year, Murray has faced Djokovic in the final in both Madrid and Rome.

His victory at the Foro Italico was his first over the world number one on any surface for nine months.

Murray's run of success may have been unexpected, but it was not achieved without hard graft.

"I worked a lot on my movement last year," Murray told BBC Sport.

"I didn't play Monte Carlo last year and I did a training block in Barcelona where I spent loads of the time working on my movement.

"It's a big strength in my game on the other surfaces, then on clay it was something that was letting me down. I wasn't sliding well or timing the slides properly."

Success has also stemmed from a decision to treat clay more like a surface for all seasons.

"I worked a lot on it the weeks before the World Tour Finals and Davis Cup," Murray added.

"I've been trying to spend more time on the clay throughout the year rather than just a six-week period, so I'm not forgetting how to play on the surface. That's helped."

Murray also has the green clay courts of The All England Club to call upon.

He is a fabulous returner, a master of constructing a point and, on his better days, a formidable practitioner of the drop shot.

In other words, he should be a natural on a surface that encourages long rallies. 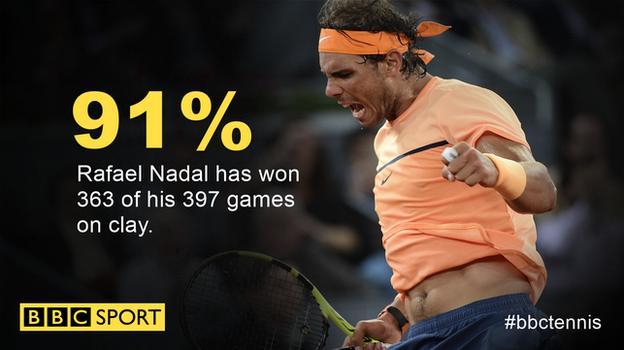 Some extra muscle on his forehand in recent weeks has also helped curtail some rallies, while his beefed up serve gives him an opportunity to win points more quickly than he is accustomed to on clay.

With Djokovic's recent dominance and Nadal looking more like the player who has won nine French Open titles, it is no surprise Murray starts as third favourite.

But if he can maintain his recent form and sustain his intensity over five sets, then the Scot has the credentials of a clay court Grand Slam champion.

And I never thought I would write that.

The pair eventually parted company in 2011 with Murray still searching for an elusive title on the surface, but five years on Corretja believes the Scot is showing more consistency in his game.

"I always felt he had a great game to play anywhere," the former world number two told BBC Sport. "He can adjust very well to the surfaces.

"He is more mature, more calm - he understands the game better. This year he came into the clay court season knowing he has a good chance.

"Right now I see him - in the best of five [sets] - as someone very difficult to beat. Physically he is very strong. Mentally, I see him as much more consistent now."

Corretja, who won 17 career titles, has also recognised a change in Murray's approach.

"He doesn't need to be talking to his box the whole time," added the 42-year-old. "He loses focus, he loses energy and he doesn't think about playing the next point.

"I talked to him a lot about that, and I'm very happy the way he is controlling his emotions right now because I think it's much better.

"When we worked together we never had this feeling that he was arguing too much - but it was the way he was.

Corretja feels surgery on Murray's back towards the end of his time as coach may also have helped the current world number two "appreciate the game he has".

"When you get through difficult situations and moments in your career, that is when you realise you can do a lot of things and maybe you were not doing things properly," he added.

How to beat the world's best

Corretja, a Sydney Olympics bronze medallist, says Murray will head into Roland Garros with confidence after beating both Djokovic and Nadal on clay this season.

"Now I see him with much more patience on clay. He knows that he can be on there for a long time but he doesn't care. He's a very tough opponent right now," he said.

"Against Rafa, sometimes tactically it's a little easier, because he can play up to Rafa's backhand and then step in and go inside out, or even step in and hit a cross-court backhand," he added.

"Against Djokovic, he faces someone that is similar to him. Very consistent, tough to win points, tough to hit winners, tough to hit even serves. Djokovic returns very well.

"For him mentally, beating Djokovic in the final in Rome helps him to get into the French Open knowing he can beat anyone on clay - even if it's Djokovic or Rafa."