Teenage British tennis star Freya Christie says making her WTA main draw debut on home territory in Nottingham is an "amazing" opportunity to show she can compete at the highest level.

The 18-year-old is in her first season as a professional and has been given a wildcard for the Aegon Open at the Nottingham Tennis Centre on 4-12 June.

"I can't wait," Christie told BBC Sport. "It will be a great experience.

"It's amazing it will be at my home town as well. I hope I can compete."

The first round gets under way on Monday, with the draw taking place on Saturday.

"I don't mind who I play," said Christie. "Anyone is a challenge in this draw but the bigger the challenge the better."

Christie was part of the Great Britain Fed Cup squad that travelled to Israel earlier this year and reached the semi-finals of the ITF Incheon Women's Challenger - a $25,000 ITF Pro Circuit event on hard courts in South Korea - last week.

"It's my first year out of juniors and I feel like I am making good progress," she added.

"It's a big step - all the players are top 100 so they know what they are doing and have good experience." 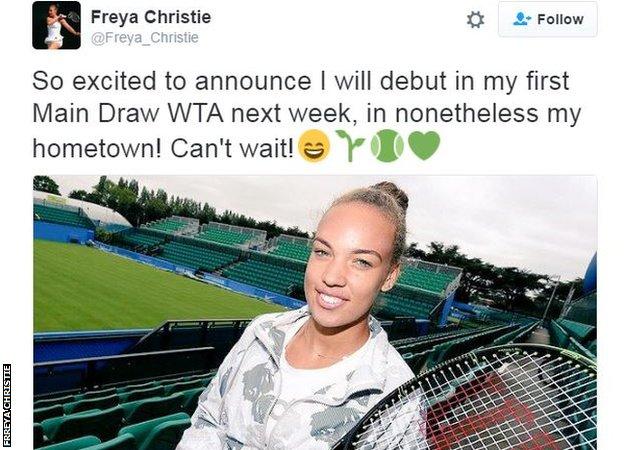