Andy Murray and Novak Djokovic will meet in Sunday's French Open final - with both men seeking their first title in Paris.

Murray, the first British man to reach a Roland Garros final since 1937, hopes to add the French Open to his victories at the US Open and Wimbledon.

Djokovic, the world number one, can finally add the one major title to have so far eluded him.

It will be the pair's seventh meeting in a Grand Slam final.

Djokovic leads that head-to-head 4-2, their overall contests 23-10 and has 11 major titles to Murray's two - but it was the Serb whom Murray beat to claim his Grand Slam victories at the US Open in 2012 and Wimbledon in 2013.

The Scot also won their most recent meeting in the final of the clay-court Italian Open four weeks ago. 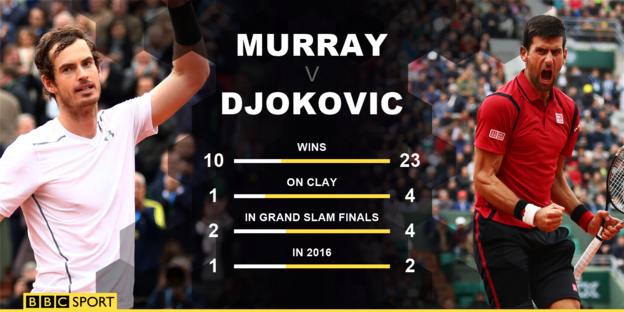 'There's a lot riding on the match'

There is a huge amount at stake for both men in Sunday's final, with Murray again looking to match Fred Perry, Britain's last male champion in 1935.

Sue Barker won the women's title in 1976 but since then a surprise run to the semi-finals by Tim Henman in 2004, followed by three semi-finals for Murray, were the best any Briton had managed on the Paris clay.

"It's obviously a very big match for both of us, Novak trying to win the career slam and me trying to win my first French Open," Murray said.

"Neither of us know how many more chances we'll have to win here. It's a very tough event to win.

"There's a lot riding on the match for both of us."

'The conditions aren't that easy'

It is the first final between two top seeds trying to win a Grand Slam title for the first time since Ivan Lendl beat John McEnroe in Paris 32 years ago.

Murray will hope to emulate the achievement of his former coach - and then second seed - Lendl, and he takes on a very familiar rival.

Both finalists turned 29 last month and have known each other since junior days - but Djokovic has taken a firm grip on their personal duel in recent years, winning 12 of their last 14 matches.

"We have had some really big battles in the Slams before on all the other surfaces," Murray said. "I'm sure it will be the same again on Sunday."

"The conditions aren't that easy," he said. "It's been cold, wet, slow - much, much slower than what we played in the last few weeks.

"Obviously getting through difficult matches, you can find your rhythm. I spent a lot of time on court at the beginning of the event. I'm starting to feel better every day."

Djokovic one win from career slam

Djokovic and Murray have stood at the top of the rankings for all but a week in 2016 - but the Serb has a huge lead and would hold all four Grand Slam titles with another victory over Murray.

Only American Don Budge in the 1930s and Australia's Rod Laver in the 1960s have achieved that feat, and just seven men have completed the career slam.

However, Djokovic has played three French Open finals without success, losing twice to Rafael Nadal and then suffering a surprise defeat by an inspired Wawrinka 12 months ago.

"I've put myself in a position in which I wanted to be in of course ever since last year's final," Djokovic said.

"It's always high on the priority list when I start a season, thinking about Roland Garros."