From Rod Laver and Billie Jean King in 1968, to Novak Djokovic and Serena Williams last year, BBC Sport has profiled each of the 96 Open Era winners to analyse the "perfect" Wimbledon champion.

Is the top seed most likely to win?

The top seed at Wimbledon is the top seed for a good reason - they are usually the best player in the world.

Why only usually? Because, although the women's seedings directly follow the world rankings, the men's system also takes into account previous grass-court performances. 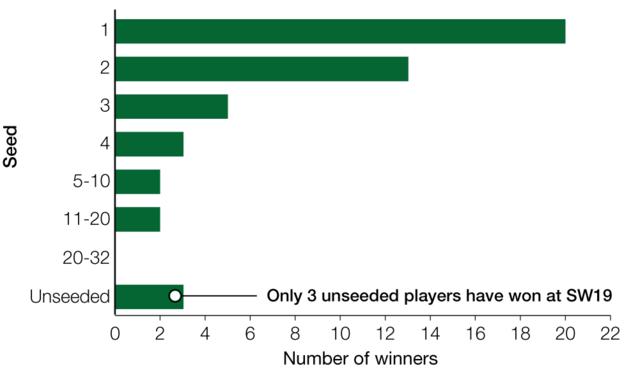 Either way, the top seed is the favourite. Twenty men - shown in the graphic above - and 21 women have gone on to become champion after being handed the top seeding. 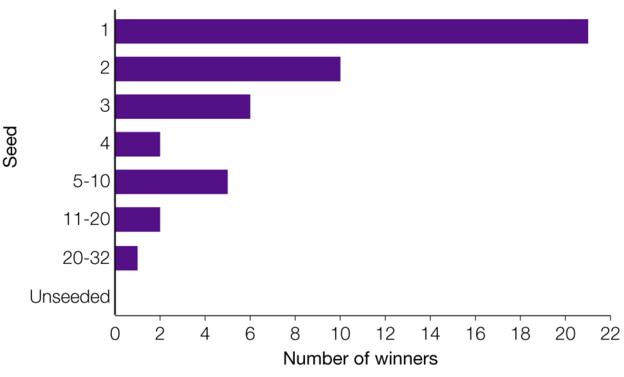 As you can see in the graphic above, an unseeded player is yet to win the women's singles title.

Age is only a number, they say. And in the case of Wimbledon champions, it is quite true.

Since Australia's Evonne Goolagong won the 1971 ladies' title, aged 19 years and 336 days, there have been six other teenage champions at SW19.

At the opposite end of the career scale, 10 winners have been aged 30 or over. They include Serena Williams, who became the oldest Wimbledon champion in the Open Era when she claimed last year's title.

Which nations have produced the most champions?

Home advantage certainly has not helped British players over the years. The UK has only produced three Wimbledon champions since 1968 - Ann Jones, Virginia Wade and Andy Murray.

That total is dwarfed by the United States, which has produced 43 winners. Fifteen American men, boosted significantly by Pete Sampras' seven titles, have claimed 31% of the Open Era titles.

But that is far below their female compatriots, who have won 28 singles' titles. Led by Martina Navratilova and the Williams sisters, they have dominated the Open Era at SW19 - winning 58% of the titles since 1968.

Is SW19 experience the key?

Nobody has won a singles title on their first appearance at Wimbledon, while only three players - Evonne Goolagong, Boris Becker and Maria Sharapova - were crowned champion at their second attempt.

Goran Ivanisevic, who lifted his only Grand Slam title by beating Pat Rafter in an epic 2001 final, and seven-time champion Roger Federer are the most experienced men to win Wimbledon. 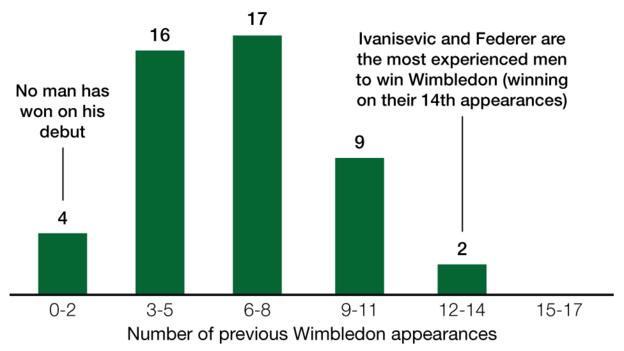 No one waited longer for a first Wimbledon title, however, than Britain's Virginia Wade. She claimed her first - and only - success at the 16th attempt in 1977. 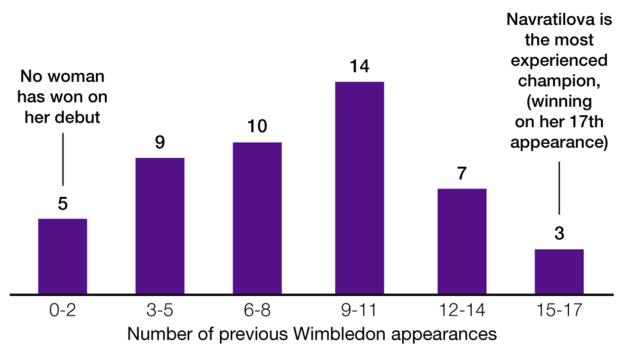 But does having a maiden major in the bag act as a springboard to Wimbledon glory? Yes. 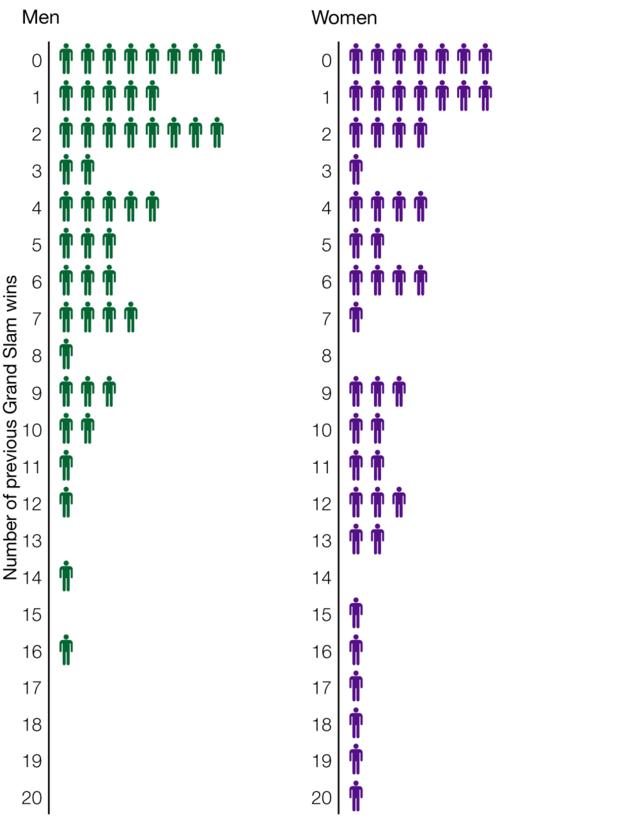 Only 15% of singles' champions - seven men and seven women - broke their Grand Slam duck in SW19.

Is Wimbledon success easy to replicate?

Once a player has won Wimbledon, the evidence suggests it is easier to go on and win the singles title again.

On average, the Wimbledon champion - both male and female - has already won two titles at SW19.

Around 90% of humans are right-handed, it has been claimed.

So it is unsurprising to discover that most Wimbledon champions are right-handed too. 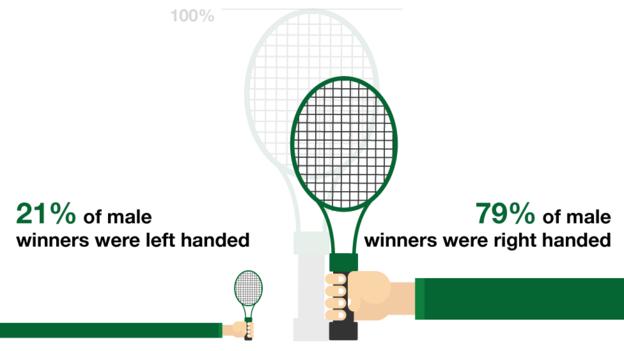 Yet with 77% holding their racquet with the right hand, their success rate appears slightly behind the human average.

Based on the general population, lefties should have won around nine Wimbledon titles in the Open Era. 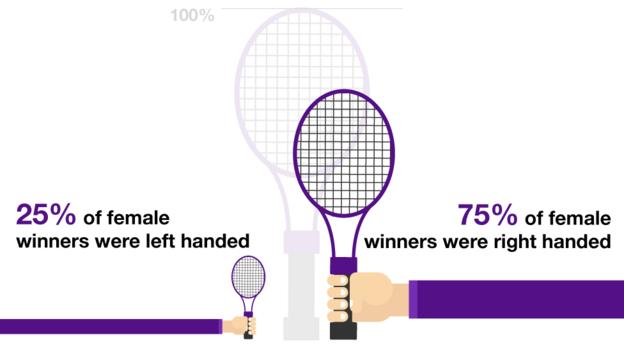 However, there have been 22 left-handed champions - 10 men and 12 women. Importantly, that tally is boosted considerably by Martina Navratilova's nine triumphs.

iWonder: Why are left-handers more likely to win Wimbledon?

With the men having to win 21 sets on their way to becoming Wimbledon champion - compared to the 14 for their female counterparts - it is little wonder far fewer have recorded a flawless victory.

In fact, only one man has won Wimbledon without dropping a set. Who? Bjorn Borg, on the way to the first of his five titles in 1976. 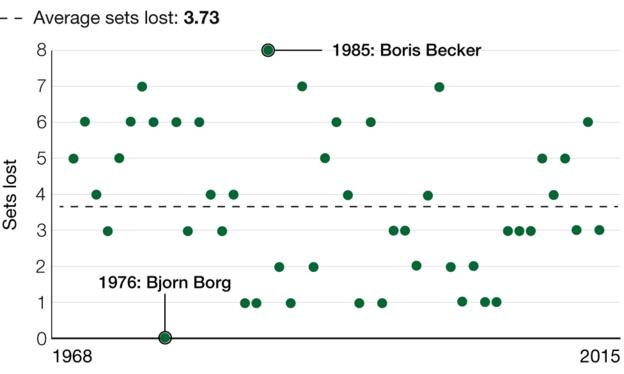 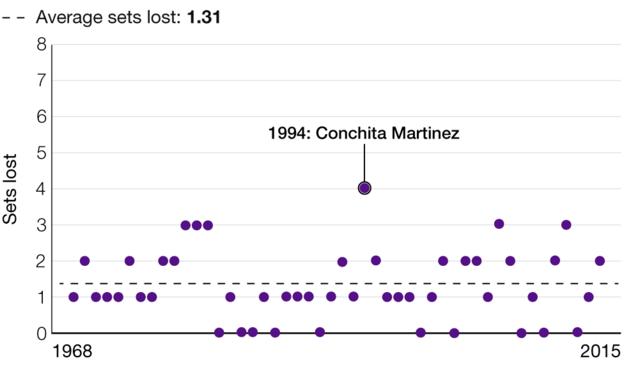 How many games does a champion have to win?

The workloads of Wimbledon champions vary considerably. Pete Sampras, on his way to the 1999 men's title, needed to win 33 fewer games than Boris Becker.

Conchita Martinez is one of only three women's champions who needed to win more than 100 games, as she did on her way to the 1994 title.

John McEnroe was hardly pushed by his seven opponents on the way to his third title in 1984, allowing them just an average of nine games each. That it is a stark contrast to 2001 champion Goran Ivanisevic, who still won the title despite coughing up an average of 20 games in each match.

If you thought McEnroe had an easy stroll, then check out Martina Navratilova's march to the 1983 women's title. The American lost an average of 3.5 games per match, compared to almost 10 by Martinez 11 years later.

While smaller players dominated the Championships at the start of the Open Era, tending to rely more on guile than sheer athleticism, the average champion has become more physically imposing over the past 30 years.

Clearly this is partly down to human evolution, but perhaps also indicative of the increased power needed to succeed at the top level of tennis.

The average height of the men's champion is 6ft 1in (1.85m). Andre Agassi and Lleyton Hewitt are the only two men under 6ft to have won the title since 1985.

Only three women's winners - Lindsey Davenport, Venus Williams and Maria Sharapova - have measured above 6ft; with the average height of a champion being 5ft 9in (1.74m).

Dark-haired men have dominated at SW19, led by Pete Sampras and Roger Federer, who have racked up 14 titles between them. 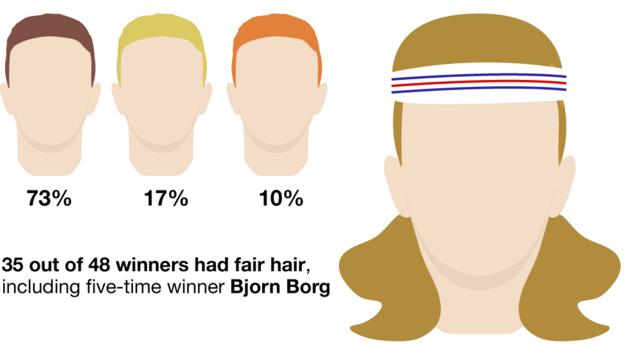 There is a equal split between brown and blonde-haired female champions, with the number of fair-haired winners significantly boosted by Martina Navratilova and Steffi Graf.

Even Serena Williams has contributed to both tallies, sporting a dyed blonde bun on her way to winning her first title in 2002. 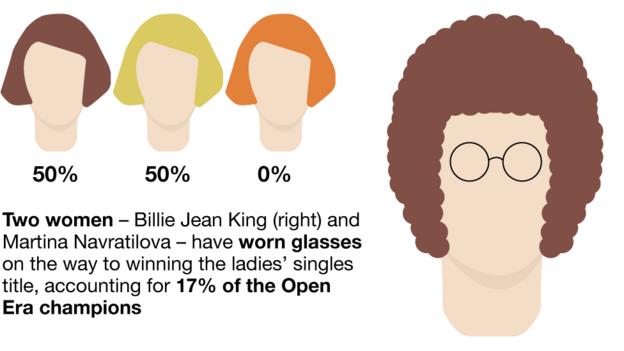 The Williams sisters - Serena and Venus - are the only black women to win the ladies' singles in the Open Era, while Aboriginal Australian Evonne Goolagong won two titles. That means 73% of female champions are white.

The men's singles has only been won by one non-white player - Arthur Ashe in 1975.

So who is the perfect Wimbledon champion?

From our analysis of each Wimbledon singles champion in the Open Era, we have worked out the profile of the perfect Wimbledon winner. Does that point to this year's winners?

In short, no. Nobody left in the draws fits the profile of the average champion.

Certainly, it is not a good indicator for Andy Murray. The Briton, other than being right-handed, doesn't tick any of the boxes.

But Serena Williams - who is American, the top seed, a multiple Grand Slam champion and 5ft 9in tall - might fancy her chances even more.