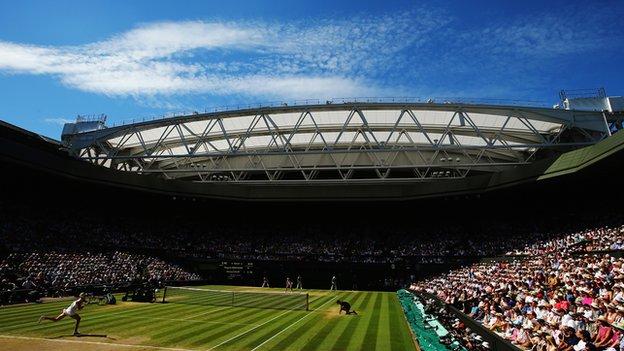 It's that time of year again.

One hundred and forty thousand punnets of strawberries ripened to perfection, 256 players dreaming of singles glory, 19 courts trimmed with precision - all for two weeks and one tournament.

And here's what you need to know as the world's best tennis players convene at the All England Club.

Can anyone stop Novak Djokovic?

The Serb has been peerless since lifting the men's title last year.

He has won the three other Grand Slam titles - US Open, the Australian Open and the French Open - and lost just six of 84 matches since he departed Centre Court last year.

The 29-year-old is only the third man in history to hold all four of the Grand Slams at the same time and is clear of world number two Andy Murray at the top of the rankings by a country mile.

Spanish great Rafael Nadal has withdrawn with a wrist injury while Roger Federer - still returning from a back injury - would have to turn around a record of six defeats in their past eight meetings to beat Djokovic.

Austrian Dominic Thiem - the leading light in the coming generation of players - was roundly thrashed by Djokovic in the French Open semi-finals.

What about Andy Murray?

The Scot famously beat Djokovic in straight sets in 2013 to end Great Britain's 77-year wait for a men's champion. Murray also won their Olympic singles semi-final at London 2012 - the pair's only other meeting on grass.

And Ivan Lendl - who helped guide Murray to those victories - is back on his coaching team after two years apart.

Murray won his fifth Queen's Club title last week in the first tournament since his reunion with Lendl - surging back to beat big-serving Milos Raonic in the final.

Will Lendl's steely glare from the players' box inspire Murray to revive the ruthlessness of three years ago?

Is Serena a certainty for the women's title?

Williams is chasing Steffi Graf's record of 22 Grand Slam titles, but has suffered a series of shock defeats since chalking up her 21st at Wimbledon last year.

Roberta Vinci, Angelique Kerber and Garbine Muguruza have all beaten the previously all-conquering American at the business end of a Grand Slam over the past 12 months.

All over for Sharapova?

In recent years at Wimbledon, Maria Sharapova has opened a pop-up store on the local high street selling her sweets range, but it is unlikely she'll be doing so this year.

Earlier this month, the 29-year-old was banned from the sport for two years after testing positive for banned heart medication.

The Russian - who has been included in her country's team for the Rio Olympics despite the ruling - claims the suspension is "unfairly harsh" and is appealing against it.

The Brits are coming

A grand total of 15 of them will start the singles tournaments.

British number one Johanna Konta is seeded 16th - the first British woman to get a protected place in the draw since 1984 - and will fancy her chances of getting to the second week.

Heather Watson and Naomi Broady have also qualified by right, with former British number one Laura Robson getting a wildcard as she continues her long battle back from injury.

Seventeen-year-old Kate Swan from Bristol - a runner-up at the Australian Open girls' event in 2015 - and British number four Tara Moore have also been given places in the main draw.

Wherever you look in the draw, there are reminders of great days at previous tournaments.

Remember Lukas Rosol's epic five-set upset of Rafael Nadal under the lights in 2012? The Czech is back.

If - as seeded - Djokovic and Murray meet in the men's final, there will be as many Grand Slam titles in the players' box as out on court.

Lendl and Boris Becker - who coaches Djokovic - are two of a slew of famous names from the past in prominent coaching roles.

It takes a lot to ruffle Roger Federer's feathers.

But Wimbledon's all-white dress code - which was tightened in 2014 to include the soles of players' shoes, stripes on their collars and the brims of their caps - does just that.

Federer was reprimanded for sporting orange soles on his shoes in 2013.

If you want an extra wide backdrop for your "I was there" Wimbledon photo, you will have to ask a passer-by to do the honours.

Selfie sticks are one of the items banned from the grounds, along with over-sized hats.

The Metropolitan Police has "thoroughly reviewed" security at the tournament since last November's attacks on Paris, and has said armed police will be deployed "in a different way" to previous years.

Expect cameos from the stars of stage, screen, society and sport in the midst of all the on-court drama.

Prince William and Kate Middleton - the Duke and Duchess of Cambridge - usually make an appearance in support of Andy Murray at some point in the fortnight.

And former England football captain David Beckham held on to a smart one-handed catch while watching a men's doubles semi-final.

There will be a wheelchair singles tournament for the first time at Wimbledon.

The competition starts on 7 July with the men's and women's finals on finals weekend.

Wimbledon - which first held a wheelchair doubles tournament in 2005 - is the last of the four Grand Slam events to introduce wheelchair singles.

Both the men's and the women's single champions will pocket a cool £2m in prize money for their fortnight's work.

No wonder Djokovic and Williams had a spring in their step at last year's Champions' Dinner.

Even the first-round losers will head home £30,000 richer.

The bad news is the majority of tickets have already been sold via a ballot system. You had to have your application in by 31 December.

The good news is - despite missing that deadline by six months or so - you can still get in.

Online ticket seller Ticketmaster puts "several hundred" tickets for the next day's play on sale over the first nine days. You'll need to have a fast click finger, though. These tickets sell out almost instantly. Or you can get a swanky lunch, some fizz and a substantially larger dent in your bank account by buying a hospitality package.

The alternative is... drumroll please... The Queue. For the big-name courts this will probably have to involve a night under canvas in nearby Wimbledon Park, a 06:00 BST wake-up call from one of the stewards and finally a little more queuing before you get in to the All England Club.

If you are happy to tour around the outside courts, an early start rather than an overnight stay in the queue should be sufficient.

Any chance of a rain-delay sing-a-long?

Sir Cliff Richard famously picked up the microphone and, with an impromptu chorus line that included tennis greats Pam Shriver and Martina Navratilova, entertained the Centre Court crowd during a rain delay in 1996.

So far, the BBC forecast for the first week's play looks mainly dry. Although it is always worth keeping the BBC Weather website and app close to hand to dodge the showers.

Extreme heat could be more of a problem.

The best seat in the house

Forget the Royal Box. The best vantage point for following this year's action is your own sofa. Or listening to your car radio. Or jabbing at your tablet screen.

There are 153 hours of coverage scheduled across BBC One and BBC Two through the fortnight.

And if that is not enough you can take control of the coverage yourself by choosing between up to 15 live HD streams on your smartphone, tablet and connected TVs.

There is no excuse for missing a moment.