Raonic led by a set and 3-0 before Murray became the first player this week to break the Canadian's serve, doing so twice in succession.

McEnroe was courtside for the final in his role as coach to Raonic, with the American's old adversary Ivan Lendl in the opposite corner after rejoining the Murray camp this week.

"It was nice of him to stick around for the presentation," Murray joked after seeing that Lendl had quickly left the court.

"It was obviously a good first week back together."

Murray, 29, had said beforehand that the final would come down to fleeting chances, and it was Raonic who was the more clinical early on.

Neither man could fashion a break point in an opening 12 games of high-class grass-court tennis.

Raonic, 25, took charge of the tie-break with three sharp volleys that suggested McEnroe is already having an influence, and despite Murray getting back to 5-5, the Canadian edged it with a forehand winner on his first set point.

It was a blow to Murray having played a good first set and Raonic appeared to land the killer blow with a break at the start of the second.

But just as McEnroe was on his feet to celebrate, Lendl remained as predictably motionless over the next hour or so as his man turned the match around in spectacular style.

Raonic looked to have a 4-1 lead in the second set, only for Hawk-Eye to overrule a volley on game point, and Murray took charge from then on.

A brilliant backhand return winner by the Scot finally ended Raonic's run of service games, and two games later the Canadian was run ragged as Murray broke again with a forehand deep into the corner.

The Queen's Club crowd was now roaring on the champion, and with Raonic offering up more second serves to attack, Murray broke again at the start of the third with a magnificent drop shot in a 24-stroke rally.

As he had done all week, Murray grew stronger with the finish line in sight, serving superbly and breaking for a fourth time when Raonic dumped a volley in the net on the third match point.

"Coming out here to try and win for the fifth time I was really motivated," said Murray.

"It was frustrating to be down a set and a break but I started to return well, and my serve worked very well the last couple of sets. I played some good stuff."

When asked if he had let the match get away from him, Raonic said: "I'd definitely say so. Normally I'm pretty confident in a situation up a set and a break.

"He did a good job getting things going. I started to hesitate a little bit." 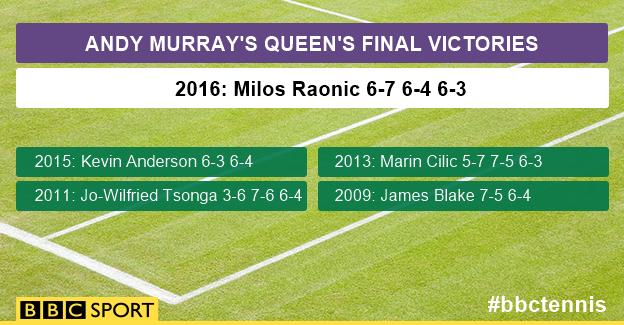 Seven-time Grand Slam doubles champion Peter Fleming: "Murray's done it in the last three matches at this tournament. In the third set he's raised his game. He broke Raonic four times. It was incredible. He dug deep and figured it out.

"He still has four and fives years left in him to make his mark and win more majors. Can he do it? That's a big question. He's in an era with at least one of the greatest players of all time. I think he's up for the challenge."

Former British number one John Lloyd: "What a match, it was a perfect contrast. I loved the way they both played, they were so aggressive. We saw Raonic's potential. Could he go one step further at Wimbledon? McEnroe thinks he can. He could be a big threat."