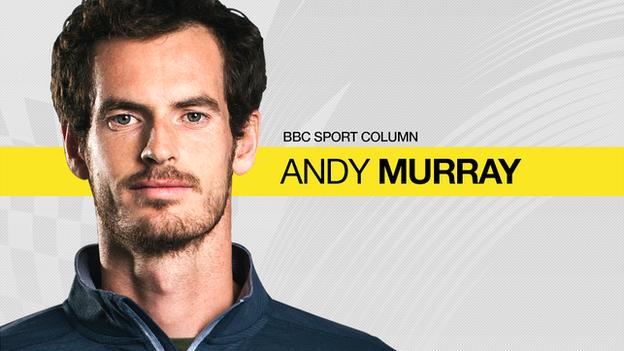 I hope Liam Broady is really pumped and excited for our first-round match at Wimbledon on Tuesday, because these are the moments you play for.

I obviously hope that I win the match but I know Liam pretty well and this is a big opportunity for him to go out there, give it a go and show everybody what he's got.

You want to be playing on the big courts against the best players, in front of a big crowd, and there's no pressure on him, so I'm expecting him to play good tennis.

And Liam won't be the only one who's nervous - before any of the Slams I feel the tension, and as the tournament goes on it calms down a little bit each day.

This will be my 11th Wimbledon and I would say it feels different to when I first played. Then there was no expectation and winning the first match was a good, positive start. Now, if I don't win the first match it's a disaster!

But I do feel good right now, I'm happy with the way I'm playing and practising and, yes, I'm ready.

'I think the Brits can spring surprises'

With 15 British players involved in the singles competitions at Wimbledon this year, and the recent success in doubles for my brother Jamie and Dom Inglot, it does feel like there's a bit of a feelgood factor around British tennis at the moment.

Don't get me wrong, it's not perfect, but this tournament is a big chance for some of them to make their mark and you just hope they do themselves justice, because it's tough working your way up through the rankings.

I played a lot of Futures tournaments, below the main tour, when I was 15, 16, 17 years old, and then you come to somewhere like Wimbledon, in front of a huge crowd with a great atmosphere, and the next week you go back to playing the Futures where there can be 10 or 15 people watching.

It's a totally different feeling, a different atmosphere, and I think you need to take motivation from matches like these when you're back in the smaller events and say "that's where I want to be".

Playing at this level, being around the top players, practising with them before the event, you learn huge amounts from that. More than you will from playing any Futures event in my opinion.

So you want them to enjoy the week but also perform, otherwise it feels like a wasted opportunity.

Hopefully everyone will enjoy the experience but fight as hard as they can for every single point, and I think there will be a few surprise performances this year from the British players.

It's three years since I last played at Wimbledon with Ivan Lendl on my coaching team, and I think we've both changed in that time.

I'm more grown up, more mature. I'm married and have a family now. Ivan's done more coaching with junior players and I'm sure that affects the way he sees things a bit too.

There's a huge difference between working with a player at the top of the game and then teenagers that you're trying to develop at a much slower rate. I'm sure that's altered the way that Ivan approaches his coaching.

We've certainly had an excellent week of practice since Queen's Club, which was a great way for Ivan to return, and it honestly hasn't felt strange having him back as part of the team again.

As the number two seed, we've known all week that I would play my opening match at Wimbledon on Tuesday, and that gives us consistency in terms of the schedule, as I know I'll play every two days.

However, that only helps if I get the job done - if I have long matches like I had at the start of the French Open, then having a couple of days off over the middle weekend can help with recovery a little bit.

My goal is definitely to try to avoid having those matches, which will hopefully set up another special couple of weeks.