Dan Evans and Marcus Willis were the only Britons to win on the opening day of Wimbledon as six other home players lost their first-round matches.

Laura Robson and Kyle Edmund were both beaten in straight sets, with James Ward, Alex Ward, Brydan Klein and Naomi Broady also out on the opening day.

Fifteen British players made the main singles draws - the most at the All England Club since 2006 - though that number was significantly reduced on a tough opening day for the home hopes.

But, in the most remarkable story of the day, British qualifier Willis - ranked 772 in the world - was a straight-set victor over world number 54 Ricardis Berankis.

"He's a good guy, friendly, harmless," Evans said of Willis. "Not a bad bone really. He's a bit of a clown. What you see is what you get with him.

"He's just a bit of a joker, just enjoys himself. You know, he's a really nice guy, one of my good friends."

Evans has enjoyed a remarkable renaissance in the past year, climbing more than 650 places up the world rankings since dropping to 772nd in May 2015.

Questions were raised about the Birmingham player's commitment to the sport when he did not turn up to a Futures event, while he also struggled with a knee injury.

But he has rediscovered his fitness and form in the past 12 months, helping Great Britain win the Davis Cup and claiming three ATP Challenger titles.

Now he has been further rewarded with his first win in the men's singles at Wimbledon.

With just five places between Evans and world number 86 Struff in the rankings, it was not surprising to see a tight match on court 18.

Evans took the first set before the pair traded tie-break wins, then the Briton shook off an injury scare in the fourth to secure his progress to huge acclaim.

"It was a good one, tough one," said Evans. "I really enjoyed it, every part of the match, even the second set. It was good to get the win in the end, get another Brit through."

Defeat means the 21-year-old is still waiting for his first win in the men's singles at Wimbledon.

The Yorkshireman had the honour of being the first home player to walk out on to court, but was unable to provide a winning start for a partisan crowd on court two.

Ranked 13 places below his opponent, he lost his serve early in the first set and never recovered in an edgy display. 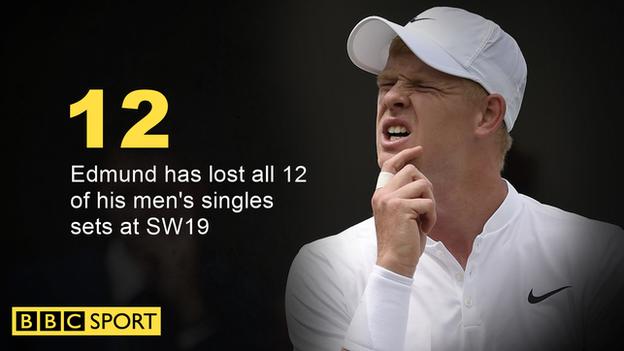 Mannarino, who reached the last 16 here in 2013, broke again in the opening game of the second set, before Edmund finally started to cause the French number nine some problems with his crunching forehands.

There was a brief glimmer of hope for Edmund when he broke back for 5-5, only to instantly lose the next game and allow Mannarino to serve out for the second.

That meant Edmund had to do something that he had never previously done - fight back from two sets down and win in five.

But another slow start in the third set left him scrambling.

Mannarino, 27, broke in the opening game and, although Edmund recovered that three games later, the Briton slipped up again to go 5-4 down.

And the left-handed Frenchman clinched a place in the second round for the fifth time with a clinical hold to love.

Robson failed to secure a morale-boosting victory as she was defeated 6-2 6-2 by Angelique Kerber.

The 22-year-old former British number one, ranked 308 in the world after missing much of 2014 and 2015 with a wrist problem, was outclassed by the Australian Open champion.

Robson, the 2008 Wimbledon junior champion, beat Kerber at the same stage at Wimbledon in 2011, but this time could not manage a single break point against the German.

"For me, it's a massive win to be here and not have any niggles for quite a few months now, apart from a very small one in Eastbourne," said Robson.

"I've worked very, very hard to be healthy, to be completely fit on court. It's 100% a huge goal for me to finish the year in the same way."

British number five James Ward also failed to make the second round, unable to cause a major upset against defending champion Novak Djokovic.

The 29-year-old lost in straight sets against the world number one on Centre Court.

Wildcard Alex Ward could not mark his Wimbledon debut with a notable shock either, losing in just an hour and a half to 11th seed David Goffin.

Naomi Broady was the first British woman to take to the Wimbledon courts on Monday - but she could not stop the run of straight-set losses.

The 26-year-old from Stockport, who broke into the top 100 for the first time earlier this year, was beaten 6-2 6-3 by 17th-seed Elina Svitolina.

But she did raise money for the Elena Baltacha Foundation - donating £70 to charity for the seven aces she hit.

James Ward on pushing Novak Djokovic: "I'm proud of myself with the way I turned it around because it could have been ugly."