Novak Djokovic and Roger Federer both made serene progress to the second round of Wimbledon with straight-set wins on the opening day.

Federer, without a Grand Slam title since winning at SW19 in 2012, was below his best but beat the world number 52 in two hours and five minutes.

Nice to be back - Federer

Seven-time champion Federer, who missed last month's French Open because of a back injury, said it was "nice to be back".

"I felt great," he told BBC Sport. "I'm so happy to be here. I have worked hard since February to be here and hoped not to miss Wimbledon and to be here fully fit so we will see if I am."

The Swiss added he was "intrigued" by the progress of Briton Willis, the world number 772.

"It is what our sport needs, where guys come from nowhere," said the 17-time Grand Slam champion.

"We have had a hard time producing those players and I am really looking forward to playing him - couldn't be more excited."

In the first match on Centre Court, Djokovic - searching for his fourth SW19 title - took the first nine games but Ward fought back in the second set, finally getting on the scoreboard in the 10th game, much to the delight of the partisan crowd.

But Djokovic - who holds all four Grand Slam titles - showed his class and big-game experience to advance.

"James was serving with a lot of precision and it was not easy to break his serve," the 29-year-old told BBC Sport.

"There is not really not much to say about the first nine games - it was flawless.

"I felt great and nerves kicked in for James. He started playing better in the second set and it got close - it was solid performance from me, though.

"This is probably the most unique experience in tennis, playing as the defending champion, on untouched grass. It is really special to feel this tradition."

"John is one of the more positive people, especially a contrast to the way he might have been on court," said the Canadian.

"He's very persistent in enforcing the positive things you do well. I think he shows that. It's good to have him here and that he has made the time possible."

In for the long haul

Sam Querrey was involved in an opening-round match against Czech Lukas Rosol that lasted three hours and 21 minutes. The American, seeded 28th, won 12-10 in the final set.

Querrey had lost the first two sets on tie-breaks but won the next two 6-4 6-2 to force the epic decider.

It was nowhere near the record set by John Isner and Nicolas Mahut in 2010, won 70-68 in the final set by Isner after 11 hours and five minutes of play over three days. 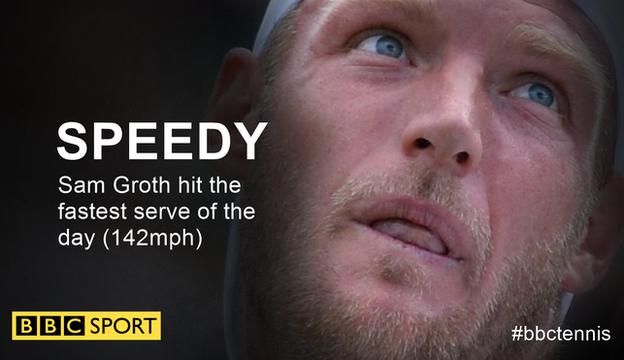