Defending champion Serena Williams reached the second round of Wimbledon with a 6-2 6-4 win over Switzerland's Amra Sadikovic.

"It wasn't tougher than I thought, but it was definitely tough," she told BBC Sport.

"I never underestimate anyone. I started fast, and that's about it.

"This is me - I'm always shouting at myself, always pushing myself. It's absolutely nothing different.

"It's great to be back at Wimbledon. Mom was in the Royal Box and that was really nice." 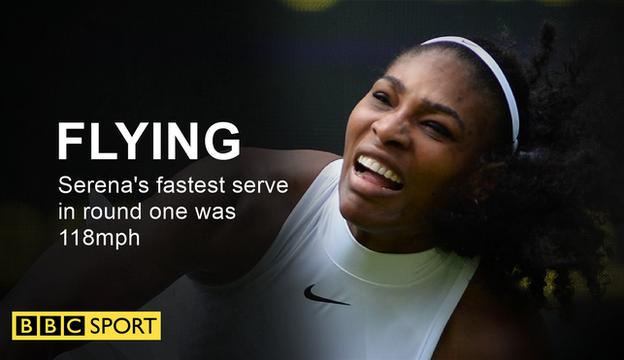 The world number one, regarded as one of the finest servers in history, achieved just a 60% success rate on her first serves.

But there was never any suggestion she would not go on to beat the Grand Slam debutant, securing victory with a successful challenge to set up a tie against compatriot Christina McHale.

Rain disrupted play on the second day, but under a closed roof on Centre Court former world number one Caroline Wozniacki lost 7-5 6-4 to world number 14 Svetlana Kuznetsova in one hour and 28 minutes.

"It was way too good a match for the first round," the Russian told BBC Sport. "I think I did great, I'm happy with my performance."

Kuznetsova will now play Britain's wildcard Tara Moore, who secured her first Grand Slam win with a 6-3 6-2 victory over Alison Van Uytvanck, becoming the fourth Briton to reach the second round.

Former finalist Eugenie Bouchard was leading Magdalena Rybarikova 6-3 2-1 while British number one Johanna Konta was 6-1 2-1 up against Monica Puig when rain stopped play.

In the Royal Box watching Serena was English actor Dominic Cooper, a friend of James Corden - the British host of 'The Late Late Show with James Corden'.

Asked whether she would get Cooper to act as a conduit so that Williams could take part in Corden's Carpool Karoke, she replied: "I can't really hold a tune. I might the first person to get kicked out of the car."

Familiar faces in the Royal Box

Serena 'kinda in love with her dress'