Serena trailed 2-0 at the start of the deciding set but won in two hours 29 minutes on Centre Court against her fellow American.

The top seed took out her anger on her racket after losing the first set.

She hammered her racket repeatedly into the ground before tossing it backward. It slid on the grass and landed in the lap of a cameraman.

"I was just really, really, really angry. I had a lot of chances," said Serena, who hit 40 unforced errors in the rain-affected second round match.

"She got really lucky on some shots. She just was playing great. I was a little disappointed in myself at that point."

Shortly after an interruption while the Centre Court roof was closed because of rain, the world number one had a set point but failed to convert.

She thought she had won the opener but was denied by a narrow Hawk-Eye overrule before the impressive McHale went on to claim it on a tie-break.

"It was a really good match. She played great and always does against me," added Serena.

"I know that mentally no one can break me and I knew being a break down in third set I had to put my mind to it and that's what I did."

Williams will now face Germany's Annika Beck in the third round. 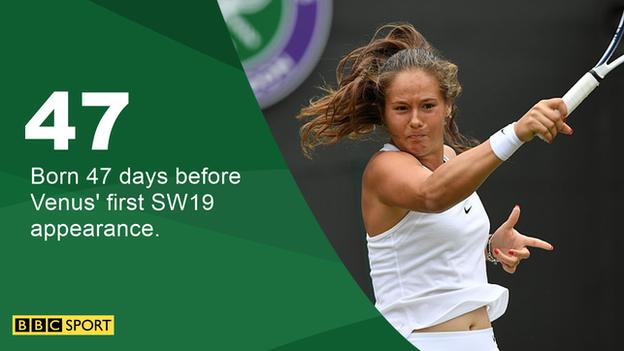 Rain three times interrupted 36-year-old Venus Williams, a five-time champion at Wimbledon, as she faced an opponent 17 years her junior in the third round.

The final interruption came as Williams had match point on the Kasatkina serve at 7-6 in the deciding set.

After a break of 72 minutes the Russian 29th seed impressively won three straight points to take the match further.

Both players struggled for rhythm at times during the match but it was Williams, seeded eighth at this year's Championships, who progressed to round four for the 14th time after two hours 41 minutes on court.

"I can't say that I've ever had a rain delay at match point," she said. "Probably not ideal. She handled it well. She played smart.

"It was just, I guess, non‑stop action. It was like a Hollywood script."